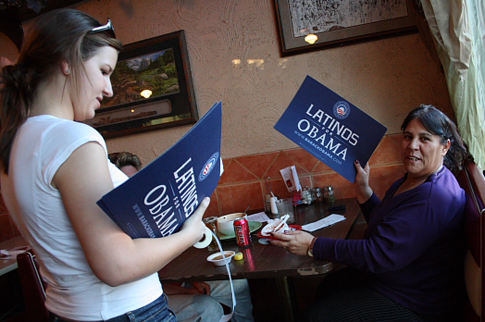 In the weeks leading up to the election, immigration experts were predicting that a “sleeping giant” was about to awake in the U.S. Yesterday, that giant opened its eyes, casted its vote, and changed the face of the American electorate forever.

Immigrant voters–particularly Latinos–are said to have played a decisive role in last night’s election outcomes. According to the Associated Press:

Democrat Barack Obama gained lopsided support from Hispanics in Tuesday’s election, winning solidly among voters with whom President Bush had made inroads in 2004…

And Obama’s “lop-sided” victory among Latinos may have just tipped the scale in his favor. According to America’s Voice, an immigrant-advocacy organization:

Barack Obama Swept the “Latino Battleground” States: Both the Obama and McCain campaigns focused their Spanish-speaking advertising and outreach on four key battleground states – CO, FL, NM, and NV. Within these states, the Latino vote’s rapid growth and break towards Democratic candidates played an important role in Democratic victories.

Just a few days before the election, President-elect Barack Obama promised Latinos that he would address immigration reform within his first year as President. Yesterday’s results—largely buoyed by the Latino and immigrant electorate—compels Obama to stick to his word and restore dignity and justice to our country’s immigration system.