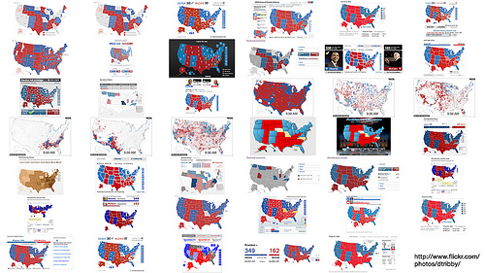 Immigration restrictionists don’t know what to do with themselves. First off, none of the vehemently anti-immigrant candidates for president got their party’s nomination (or a great deal of public support), and both presidential candidates agreed on the need for comprehensive immigration reform – including a path to citizenship for undocumented immigrants. Restrictionist poster child Lou Barletta failed to win his election for Congress in Pennsylvania and Libby Dole in North Carolina along with other enforcement-only candidates across the country lost to candidates who supported enforcement PLUS some kind of immigration reform.

In the National Review Online, Mark Krikorian–Director of restrictionist organzation Center for Immigration Studies, apparently unable to find any other light at the end of the tunnel, hopes that President Obama will continue the heavy handed enforcement measures initiated by the Bush Administration, including a vast expansion of the flawed E-Verify employment verification system. Without doing so, Krikorian claims, Obama will lose his credibility in the eyes of Americans.

The Federation for American Immigration Reform (FAIR) has stated that the elections are a clear mandate for rejecting “amnesty.” Today’s new polling data from America’s Voice, the Benenson Strategy Group, and Lake Research Partners discredits their ludicrous claims with findings that Americans overwhelmingly reject deportation-only strategies and support fair, practical solutions including requiring undocumented immigrants to legalize their status, learn English, pay a fine, and pass a background check.

The data shows that a full 67% of the general public believe immigrants should “be required to register and become legal .” Only 14% believe that all undocumented immigrants should be deported. Even the country’s economic problems have not caused the majority to waiver — 62% of those polled responded that we’re better off if people illegally in the U.S. became legal taxpayers. And 57% say that resolving the immigration problem should be a high priority. That sounds like a mandate for fair, practical, meaningful immigration reform.