Worried About the Mortgage Market? Don’t Blame an Immigrant 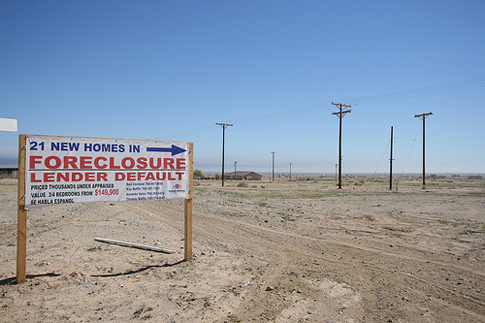 Anti-immigrant zealots, as part of their never-ending crusade to blame immigration for virtually every economic and social problem in the United States, continue to insist that the collapse of the subprime mortgage market was rooted in nefarious home purchases by undocumented immigrants. On November 18, a rambling post to the “Political Awareness and Responsibility” blog managed to blame the 1965 Immigration Act, Senator Ted Kennedy, and ACORN for unleashing hordes of undocumented home buyers with subprime mortgages upon an unsuspecting American public. The author follows in the footsteps of anti-immigrant columnist and commentator Michele Malkin, who helped kicked off this round of subprime immigrant blame-gaming back in September.

The evidence behind this bizarre conspiracy theory? It’s foolishly assumed that since many Latino home buyers received subprime mortgages, and many Latinos are immigrants, and many immigrants are undocumented, that therefore many undocumented immigrants had subprime mortgages. How many, exactly? Apparently numbers are not really necessary for the argument. Despite the fact that non-Hispanic whites accounted for 56% of subprime loans in 2006, the author of the post just knows that there were enough undocumented immigrants in foreclosure to push an otherwise healthy U.S. economy over the brink.

This kind of rhetoric might actually be funny if not for the fact that the relentless scapegoating of immigrants creates the milieu in which hate crimes against immigrants, Latinos, and anyone else who might be perceived as “foreign-looking” grow and flourish. Blaming immigrants for the current condition of the U.S. economy diverts attention away from real solutions to our economic woes. Even worse, it provides a veneer of respectability to the actions of those groups and individuals inclined to take out their frustrations on anyone who doesn’t look or sound like they do.