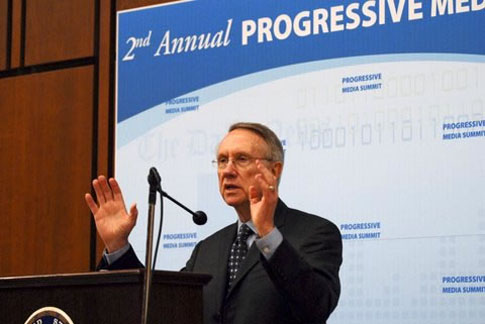 Last week at the 2009 Senate Democratic Progressive Media Summit Democratic Senators laid out priorities for 2009. Senator Majority Leader Harry Reid spoke with great force about the need to enact immigration reform and his intention to do so in the coming year.

While he prefaced his comments by stating that immigration is the issue that garners the most “threats” against him, he said comprehensive immigration reform is important to our country. While he said it must include protecting our borders, a guest worker program, and employer sanctions; he also said we must bring the “10 million out of the shadows” and described a program that would put them in a line for citizenship where they would pay penalties and fines and get right with the law.

He finished up by telling the story of a young woman he met at an event in Smith Valley, Nevada who explained to the Senator that she was at the top of her class, but wouldn’t be able to attend college because her parents were undocumented. He said “I can’t get this girl out of my mind.”  For video of his statements visit RI Future who posted video of his comments and wrote:

Senate Majority Leader Harry Reid surprised me yesterday with his answer on immigration at the Progressive Media Summit.  There were no midling, evasive answers: he went right at the issue and promised action this year…