Unemployed Americans Are Just Collateral Damage in War on Immigrants 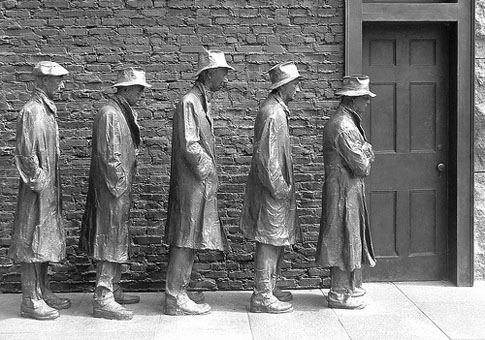 It would seem that the Center for Immigration Studies (CIS) and the Heritage Foundation regard unemployed Americans as little more than collateral damage in their endless war against immigrants.  Both groups have concocted a new and predictably anti-immigrant argument against passage of the economic stimulus bill now under consideration in the U.S. Senate, which is intended to save or create jobs for millions of unemployed and soon-to-be-unemployed Americans.  According to CIS and the Heritage Foundation, the fatal flaw of this bill is that some of the jobs it creates, especially in the construction industry, might end up in the hands of undocumented immigrants.  Apparently, this is reason enough to delay passage of the bill until it is modified to require unemployed Americans to jump through hoops in order to prove that they are entitled to work in the United States.

Specifically, CIS and the Heritage Foundation maintain that the only way for the Senate to prevent undocumented immigrants from swarming into jobs created by the stimulus bill is to follow the lead of the House of Representatives, which added a provision to the bill requiring all contractors benefiting from the legislation to use “E-Verify”—a federal, electronic, employment-verification pilot program which ensnares U.S. citizens in its database errors, adds to the costs incurred by employers required to use it, and does not actually prevent undocumented immigrants from getting jobs. The Heritage Foundation in particular pretends that E-Verify is a highly effective system which could be made mandatory for all employers and expanded nationwide quickly, easily, and at minimal cost. Yet the Department of Homeland Security’s own contractor, Westat, and the Social Security Administration’s Inspector General agree that E-Verify is not exactly a paragon of efficiency ready for its debut on the national stage. Any attempt to expand E-Verify overnight would be a costly and chaotic mistake that would neither help the economy nor fix our broken immigration system.

As the U.S. economy sinks deeper into recession and the ranks of the unemployed grow with every passing day, now is not the time for anti-immigrant grandstanding on a stimulus bill. Undocumented immigrants are not going to sabotage our economic recovery. But delaying a rescue package for unemployed Americans so that it can be used to score political points in the immigration debate just might.