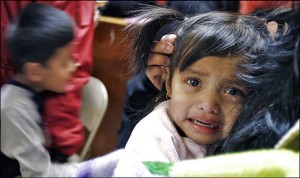 An unidentified child is held by her mother, Wednesday, March 7, 2007, at a news conference in New Bedford, Mass., the day after her father was among 327 of the 500 employees of Michael Bianco Inc., who were detained by immigration officials for possible deportation as illegal aliens. (AP Photo/The New Bedford Standard Times, Peter Periera)