Sheriff Joe Arpaio to Recruit and Arm Citizens, Neo-Nazis “Have His Back” 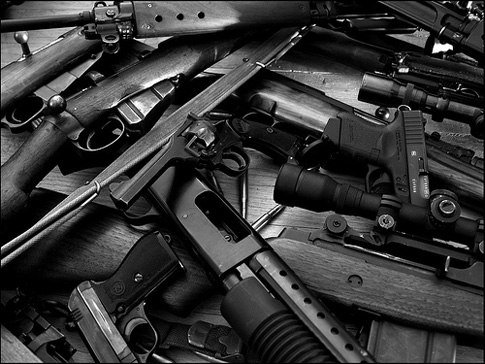 Rather than cleaning up his police department and addressing allegations of racial profiling and discrimination, Arpaio has decided to recruit and arm more Maricopa citizens in the absence of state funds.  Back in April, the Maricopa County Board of Supervisors in Arizona voted to postpone the acceptance of $1.6 million from the state to help pay for County Sheriff Joe Arpaio’s controversial immigration enforcement tactics.  Observers said the decision could signal that the board is concerned by federal inquires into Arpaio’s practices that stem from his hard-line immigration tactics which include the deputization of volunteer “posses” to perform immigration sweeps, armed workplace raids, and set up checkpoints.

Currently there are about 300 armed posse members in a volunteer force now numbering nearly 2,600 men and women, the largest volunteer posse in the nation.  Volunteers must simply supply their own weapons and graduate from a training class that consists of 160 hours of law enforcement instruction.  According to Joe Arpaio:

“The public has a desire to help local law enforcement when times are tough. I am banking on their generosity of time and energy to help my deputies keep our communities safe.”

Joe Arpaio didn’t create the posse program —  volunteer law enforcement officials have been in existence since the 1930s.  What’s troubling is the sort of “public support” Arpaio is garnering in response to his uncompromising commitment to chasing brown-skinned busboys and nannies through the desert.  Last Saturday, a march protesting Arpaio’s anti-immigrant tactics was nearly disrupted by the actions of several, well-known white supremacists who hurled racial epithets in an effort- as the Anti-Defamation League noted– to incite violence in support of Sheriff Arpaio.  Shortly after, alarming video footage and photos on white supremacist web pages surfaced documenting an amicable exchange between Joe Arpaio and his neo-nazi supporters who said they “have his back.” The videos show Arpaio taking photos with white supremacists and passing along information about the marchers’ progress.

“The hate and bigotry of Sheriff Arpaio and his supporters must be exposed, confronted, and overcome.  What is happening in Maricopa County is nothing short of a human rights crisis on United States soil.”

Crime-solving is down and racial profiling and budget expenditures are way up, but Arpaio is stubbornly refusing to back off.  If Arpaio really intended on enforcing the law, maybe he would take a look at the 40,000 outstanding felony warrants gathering dust in his office.  Rather than resorting to asking his own community members to carry out his dirty work, he might stand a better chance of solving his budget problems by focusing more on catching violent criminals, and spending less time and money on his expensive, over-the-top, media-grabbing immigration-enforcement tactics.

Neo-Nazi Vito Lombardi in a pic taken at Saturday’s protest.