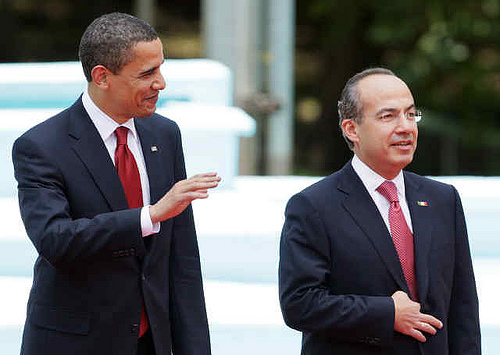 Last Friday, President Obama spoke to a group of Hispanic reporters at the White House and again reaffirmed his commitment to passing a comprehensive immigration reform bill sometime in early 2010, with a draft to be ready as soon as the end of this year. “We have convened a meeting of all the relevant stakeholders,” the President said, “and Secretary Napolitano is working with the group to start creating the framework for a comprehensive immigration reform.” One of the things standing in the way of his immigration efforts, the President Obama joked, are members of the Republican Party who still believe he is an illegal immigrant. Sad, but true.

President Obama’s most recent comment on the continued momentum of an immigration reform bill coincided with his first U.S.-Canada-Mexico Summit in Guadalajara, Mexico on Sunday. The President met with Mexican President Felipe Calderon and Canadian Prime Minister Stephen Harper to discuss, among other things, trade, economic recovery strategy, border violence and security, and most importantly, a recommitment to immigration overhaul efforts, which includes a path to citizenship for undocumented immigrants.

Now, am I going to be able to snap my fingers and get this done? No,” the president said. “But ultimately, I think the American people want fairness. And we can create a system in which you have strong border security and an orderly process for people to come in. But we’re also giving an opportunity for those who are already in the United States to be able to achieve a pathway to citizenship so they don’t have to live in the shadows.

So what movement have we seen since President Obama’s bipartisan immigration meeting back in June? Unfortunately, the real answer spans “the good, the bad and the ugly.” The good includes a small but welcomed improvement of U.S. immigration detention policy and Senator Schumer’s continued efforts to craft workable immigration legislation; the somewhat-to-mostly bad includes a refocus and expansion of the 287(g) enforcement program; and the ugly, by far, is the Senate’s vote to complete the 700-mile Bush-authorized border fence by the end of 2010.

But even accounting for immigration victories and setbacks, both large and small, accumulated along the way, President Obama’s firm resolve to see a smart and comprehensive immigration reform bill hit the floor this year should be counted as a big part of “the good.” As Congress continues to draw the curtain of political theater back and forth, it’s important to remember that our President is still committed to his campaign promises to “secure our borders, fix the dysfunctional immigration bureaucracy and increase the number of legal immigrants to keep families together, and bring undocumented immigrants out of the shadows” through the passage of an immigration reform bill.