1,200 National Guard Troops to the Border: A Bargaining Chip or More Political Pandering? 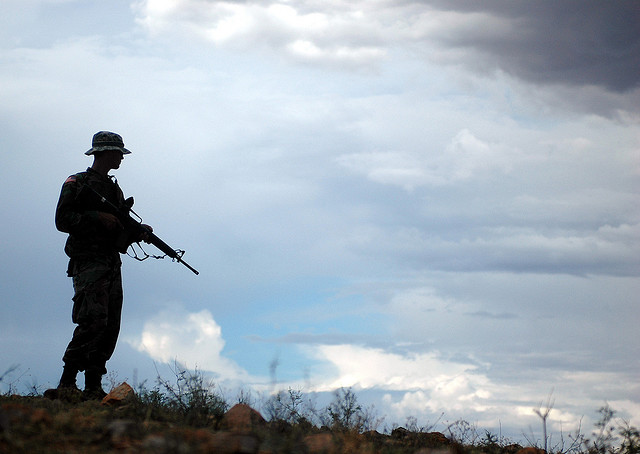 Yesterday, President Obama met with Senate Republicans to discuss, among other things, moving forward with comprehensive immigration reform. But what came out of the meeting was a letter to Senator Carl Levin, Chairman of the Armed Services Committee, requesting 1,200 troops to be sent to the U.S.-Mexican border and a $500 million request for additional border personnel and technology as part of the Emergency Supplemental Appropriations Bill. While the President’s intentions to address the real sources of violence and crime along the border—that is, drug cartels and gun traffickers, not immigrants—is duly noted, the President is being perceived as piling enforcement on enforcement and pandering to Republicans with no real forward movement on reform.

Following the meeting, President Obama was widely criticized from all sides. Immigration advocates and Senate Democrats were quick to jump on the President for kowtowing to Republicans without getting much in return while border-frenzied Republicans and restrictionists remarked that the President wasn’t doing enough.

According to Frank Sharry of America’s Voice, President Obama is letting Republicans control the conversation:

Giving in … on immigration sure has the same feel as when the administration caved and excluded unauthorized immigrants from the health care exchange following Rep. Joe Wilson’s [R-S.C.] rude outburst last year. It has the feel of the president’s recent embrace of offshore drilling, just weeks before the BP disaster struck … Give them what they want and hope they’ll play nice.

Similarly, Senator Bob Menendez (D-NJ) criticized the “Obama administration’s militarization of the border” as “submission to the political forces brought by the Republican Party.”

Meanwhile, Senator John McCain (whose recent 180 on immigration reform is chalked up to his senate battle with restrictionist J.D. Hayworth) complained that 1,200 troops were “simply not enough. We need 6,000.” In 2006, President Bush sent 6,000 National Guard members to the border to “step up security while the Border Patrol expanded its ranks,” but they were later withdrawn.

While President Obama acknowledged that an immigration overhaul is needed to fully address border issues, there wasn’t any movement on the reform front. Enforcement alone has never been a solution to our immigration problems. Throwing more money at the problem as the sole means of solving it is not only fiscally irresponsible, but also ineffective. Over the last two decades, the United States has spent billions of dollars on border enforcement while the number of undocumented immigrants in the United States has roughly tripled from 1990 to 2008, from 3.5 million to 11.9 million.

So, if the President is using border enforcement as a bargaining chip for reform, just what exactly is he getting in return? Without a solid push from the White House or Republican sign-on, the President seems to be sending the message that “borders first” is his number one immigration priority. After years of failed “borders first” strategies, many Americans—especially Latino voters—are wondering just when the federal government is going to take that crucial second step.

Photo by The National Guard.