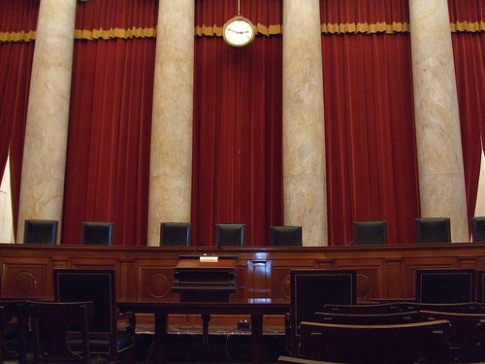 Those following the Obama Administration’s legal challenge to Arizona’s SB 1070 have likely heard about “preemption”—the legal concept governing when state laws conflict with, and are therefore superseded by, acts of Congress. The heart of the dispute over SB 1070 is whether states have a right to provide assistance that the federal government does not want.

No one knows if or how the Supreme Court will ultimately answer that question. But a number of hints may emerge when the Justices issue a ruling in Chamber of Commerce v. Whiting, a case testing the legality of a different law known as the Legal Arizona Workers Act. Passed in 2007, the act imposed new requirements to prevent employers from hiring unauthorized workers, as well as harsh consequences for doing so. While the Justices’ questions during Wednesday’s oral argument offered reason for hope among immigrants’ rights advocates on one part of the law, they left the fate of the other unresolved.

First, the good news: based on the questioning, the Court seemed inclined to strike down Arizona’s requirement that every employer in the state use E-Verify, the error-prone federal database meant to confirm whether job applicants can legally work in the United States. Ever since Congress created the program (formerly known as “Basic Pilot”) in 1996, employer participation has, with very limited exceptions, been voluntary. Not surprisingly, a consensus seemed to emerge at Wednesday’s argument that Arizona’s mandate posed an obvious conflict with federal law. As Justice Kennedy put it, making an optional program mandatory is “a classic example of a State doing something that is inconsistent with a Federal requirement.” (The full transcript is here.)

Now, the more complicated issue. Justice Kagan, who previously worked on the matter as Solicitor General, recused herself from the case. And the remaining eight Justices appeared equally divided on whether to uphold the other provision of the act, which permits state officials to investigate employers accused of hiring unauthorized workers, and to revoke the business licenses of those found guilty of doing so. (Many immigrants rights groups, including the American Immigration Council, which submitted a brief to the Court, have criticized state employer sanctions laws because current law requires a uniform federal immigration scheme, and because of their potential to make companies discriminate against job applicants who are—or appear to be—foreign born.)

In the event of a 4-4 split, the Court would automatically affirm the decision below, which upheld Arizona’s employer sanctions scheme. But because no side would receive a majority, the decision would not be binding in future cases. Thus, if Justice Kagan agrees with the sentiments of her liberal colleagues, who seemed inclined to strike down the provision, Arizona’s technical victory could be overruled in any future case in which she participates.

Such an opportunity could come as soon as next term. Back in September, a federal appeals court in Philadelphia struck down a law enacted in Hazleton, PA, that also included controversial employer sanctions provisions. Earlier this week, the town’s attorneys—including the infamous Kris Kobach, who also authored SB 1070—filed a petition asking the Supreme Court to overturn that decision. Since the Justices are clearly interested in the issue, it’s quite likely they will take up the suit against Hazleton’s law if the Court cannot muster a majority in Wednesday’s case. If that happens, a “win” for Arizona in the short term could quickly become a loss in the long run.