President Obama’s Speech on Immigration: Campaign Politics or a Call to Action? 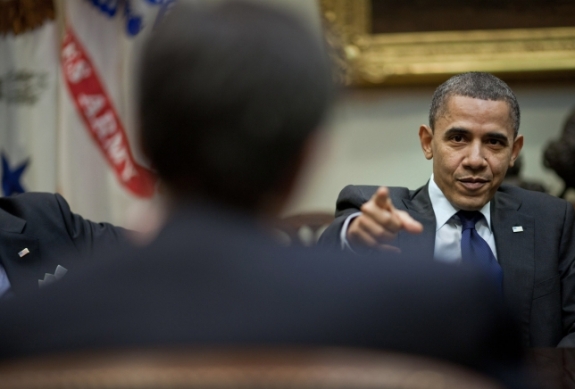 Today in El Paso, President Obama delivered his second major speech dedicated to fixing our broken immigration system. The President addressed some of the major obstacles to passing comprehensive reform—namely the “border-first” crowd’s repeated claim that the Administration hasn’t done enough to secure the border—by touting the record level of resources invested along the border. The President also framed the need for reform as an economic imperative, highlighting the benefits of reform for America’s middle class and for America’s ability to compete in the global economy. But the major takeaway from the President’s speech today was the President’s call to action.

After defending his record on enforcement, providing an economic framework for reform, outlining what that reform would actually look like and shaking his head at Congress’s failure to pass the DREAM Act, the President asked for the public’s help in motivating “Congress to catch up to a train that’s leaving the station.” He asked everyone to take responsibility for reform and participate in the debate:

We’re going to keep up the fight for reform. And that’s where you come in. I will do my part to lead a constructive and civil debate on these issues. We’ve already held a series of meetings about this at the White House in recent weeks. And we’ve got leaders here and around the country helping to move the debate forward. But this change has to be driven by you – to help us push for comprehensive reform, and to identify what steps we can take right now – like the Dream Act and visa reform – areas where we can find common ground among Democrats and Republicans to begin fixing what’s broken.

I am asking you to add your voices to this debate – and you can sign up to help at whitehouse.gov. We need Washington to know that there is a movement for reform gathering strength from coast to coast. That’s how we’ll get this done. That’s how we can ensure that in the years ahead we are welcoming the talents of all who can contribute to this country; and that we are living up to that basic American idea: you can make it if you try.

Although some have and will continue to criticize the President for failing to use his executive authority to fix parts of our broken immigration system, the significance of today’s speech rests far more with the need to create a groundswell of support around reform. As one senior Administration official said, “The president is leaning in and asking others to lean in with him.” And “leaning in” with the President, according to White House Press Secretary Jay Carney, will help put pressure on those in Congress standing in the way of progress:

“We already know from the first two years, the last Congress, that there was political opposition to comprehensive immigration reform, including from some places where there used to be political support,” said presidential spokesman Jay Carney. “We are endeavoring to change that dynamic by rallying public support, by raising public awareness about the need for comprehensive immigration reform.”

While it’s easy to take the cynic’s route by criticizing today’s speech as a campaign opportunity for President Obama to court the Latino vote, a better test of advocates’ resolve for reform would be to actually engage the President’s request, add their voice to the debate and push the tenets of smart and effective reform as far and wide as possible.