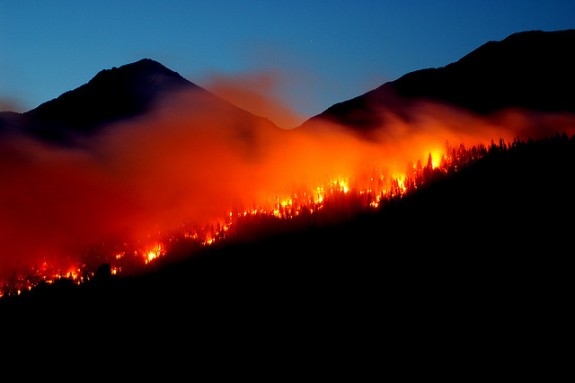 During a press conference Saturday, Sen. McCain blamed undocumented immigrants for the devastating wildfires sweeping through Arizona and southern states, suggesting they started fires to “divert law enforcement agents.” While a U.S. Forest Service official stated there is no evidence suggesting undocumented immigrants are to blame, Sen. McCain, like many restrictionists, took the opportunity to turn tragedy into talking points by exploiting a natural disaster for a sound bite, calling for the need for more border security.

We are concerned about, particularly, areas down on the border where there is substantial evidence that some of these fires are caused by people who have crossed our border illegally. The answer to that part of the problem is to get a secure border.

Clearly, as U.S. Forest Officials point out, unauthorized immigrants are not to blame for the wildfires that have scorched 4.3 million acres across seven states this year. Try prolonged draughts, high temperatures and 50 mph winds. But McCain’s comments are indicative of a larger problematic trend within the immigration debate—the anti-immigrant B-footage portrayal of undocumented immigrants as the source of all our domestic problems.

McCain, sadly, is simply borrowing a page from the immigration restrictionist handbook, “How to Fan the Flames of Fear and Blame Immigrants for Everything.” Restrictionists have blamed immigrants for everything from global warming and our mortgage crisis to the swine flu epidemic and leprosy. Why? Because it’s far easier to stir fear to advance an agenda than it is to actually engage in a civil and constructive conversation.

It may be easier to throw stones and make wild accusation about unauthorized immigrants, but calling out rhetorical flame throwers and reframing the discussion to actually address our immigration problem, while more difficult, is far more constructive. As Smokey the Bear would say, “Only YOU can prevent opportunists from blaming immigrants for FOREST FIRES!”

UPDATE 06/21/11 – Sen. McCain, in response to media backlash over his comments, said he is “puzzled over the controversy” and that he wasn’t referring to the Wallow Fire (named after the Bear Wallow Wilderness area where the fire is burning) in Springerville, Arizona, but fires in southern Arizona in general. He then promptly blamed a Forest Service briefing.