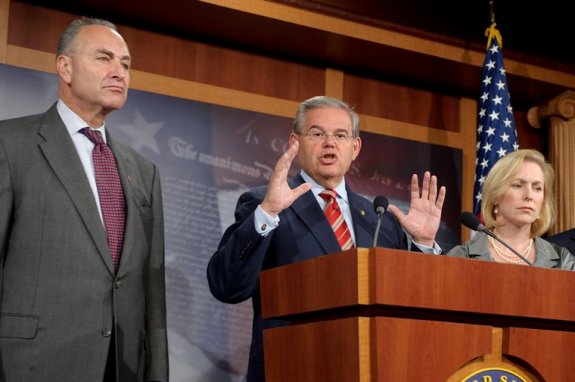 While some in Congress continue attempts to enforce a way out of our immigration problems, others, like Senator Robert Menendez (D-NJ), are offering balanced solutions that address not just one, but many facets of our broken immigration system. Today, Senator Menendez (D-NJ), along with Senators Harry Reid (D-NV), Patrick Leahy (D-VT), Richard Durbin (D-IL), Charles Schumer (D-NY), Kristen Gillibrand (D-NY) and John Kerry (D-MA), introduced the “Comprehensive Immigration Reform (CIR) Act of 2011,” a bill which offers a comprehensive framework for lasting reform.

Unlike stand-alone enforcement bills, Senator Menendez’s proposal includes strategies to address undocumented workers currently living in the U.S., such as the creation of Lawful Prospective Immigration (LPI) status.  Applicants for LPI status would be required to submit biometric data, go through security checks and pay a fine. After six to eight years of LPI status, they could then transition to Legal Permanent Resident (LPR) status (obtain a greencard), but only after they pay taxes and additional fines, learn English and U.S. civics and undergo additional background checks. And even then, LPIs would have to wait behind those already in line for LPR status.

In addition to DREAM Act and AgJOBS provisions, Senator Menendez’s bill includes improvements to regulate the future flow of legal immigrants by creating a standing commission which would study labor market and economic conditions to determine the number of employment-based visas needed. The bill also supports programs that better facilitate immigrant integration, such as enhanced policies to help immigrants learn English and grants for states that successfully integrate newcomers.

On the flip side, Sen. Menendez’s bill balances these provisions with enforcement measures, like establishing border enforcement triggers that must be met before unauthorized immigrants can apply for permanent residency, requiring DHS to track the departure of noncitizens to ensure they do not overstay their visa, as well as a mandatory E-verify program, among others.

Clearly there is no one-size fits all solution to our broken immigration system. Rather, we need a collection of smart and balanced fixes—fixes that account for not only the 11 million undocumented workers currently in the U.S., but also the structural failures in our system and gaps in enforcement. Without a balanced solution, we are bound to rehash the same immigration failures over and over again while our economy, society and country suffer. Sen. Menendez’s bill is a good start.