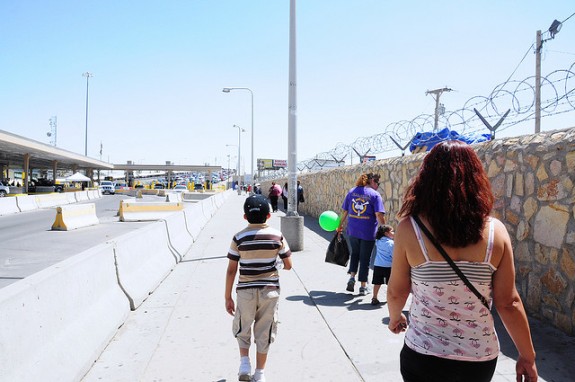 Listening to politicians, one would think that the border is rife with murder, arson, theft, kidnapping, and every other type of violent crime imaginable. Unfortunately, those who spread these images often conflate the violence associated with drugs and arms trafficking with immigration, unfairly painting immigrants as the perpetrators. This image of a violence-ridden, out-of-control border has been used to justify increasingly higher spending on enforcement along the border, increases in Border Patrol agents and the deployment of the National Guard. Immigration restrictionists have also used images of border violence and immigrants committing crimes to shut down attempts at serious comprehensive immigration reform.

However, as residents who live along the U.S. side of the border have known for years, the border is actually a very safe place, and reports of “spillover” violence from Mexico are unfounded. New data recently compiled by USA Today confirms the fact that U.S. border cities have not been struggling with the violence and crime associated with drug and arms trafficking in Mexico. In fact, border cities are statistically safer than other similarly-sized cities in the border states.

USA Today, using data from city and county police agencies and from the FBI found that, from 1998 to 2009, the murder rate for cities within 50 miles of the border was lower than the respective state average. The robbery rate was also lower than the state average. And the FBI reports that kidnapping cases are declining.

In fact, El Paso, TX—located right across the border from notoriously dangerous Ciudad Juarez—was named the safest city in the US in 2010, and has consistently been in the top three since 1997.

Despite all of this evidence, Congress and the Administration remain intent on maintaining the violent border imagery and putting money and personnel along the border. In 2010, for example, the Obama administration authorized the deployment of 1,200 more National Guard troops to enhance border security and requested an additional $500 million from Congress to further modernize southwestern border security. Congress also approved $600 million in the “Border Security Supplemental Appropriations Act of 2010.”

According to border experts David Shirk and Eric Olson, the U.S. is putting its enforcement resources and muscle in the wrong place. Rather than focusing on illegal immigration, more enforcement dollars should be redeployed to “intelligence-based law-enforcement efforts” to focus on cartels and disrupt the flow of guns, drugs, and money. Shirk and Olson also suggest that Congress:

…bring immigrants who are otherwise law-abiding out of the shadows and provide them with legal avenues to enter the country. Widening the gates—with more elastic quotas for work visas (especially for our Mexican and Central American neighbors)—would allow U.S. Border Patrol agents to turn their fullest attention to organized criminal groups and would-be terrorists without the distraction of hunting down would-be gardeners and dish-washers.

There is a great deal of data dispelling the myth of an out-of-control border and immigrants committing crime. Border experts continue to advocate focusing border enforcement resources on drug trafficking, arms trafficking, and money laundering. The question is, when will Congress get over its fixation on deporting immigrants and begin a constructive debate over fixing our broken immigration system and addressing real problems along the border?