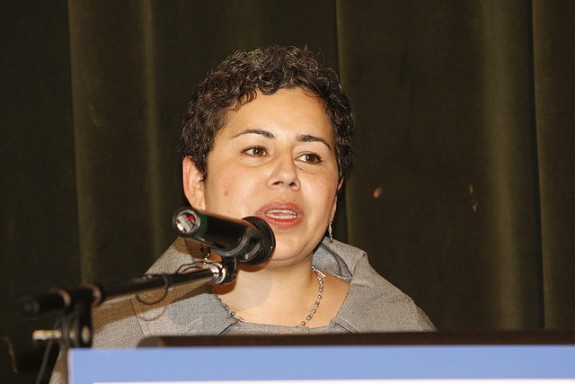 Clarissa Martinez, Director of Immigration and National Campaigns at NCLR.

As the dust continues to settle around the Department of Homeland Security’s (DHS) announcement last week that it will review some 300,000 pending deportation cases on a case-by-case basis as well as issue agency-wide guidance on using discretion to focus resources on high priority cases, some groups were quick to dismiss the announcement as political pandering. Predictably, restrictionist groups reacted like they always do whenever the administration does something to improve the immigration system—by screaming “amnesty” and accusing the administration of making end runs around congress. Today, however, leaders from the Latino community defended the administration’s actions as “a huge step forward” and even invited critics to come to the table with their own rational immigration policies.

On a conference call today, Clarissa Martinez, Director of Immigration and National Campaigns for the National Council of La Raza, responded to claims that the administration was pandering to Latino voters by applauding the administration efforts to focus resources on effective enforcement priorities:

This is a huge step forward for the nation as a whole. This announcement means that DHS will prioritize national security and public safety in deploying available resources in the area of immigration enforcement.

For those who believe this is purely political, the Latino community welcomes [you] to compete for the support of this electorate. [You] don’t have to cede this platform to the President. Come to the table with rational policies and you will get the attention of this community.

This is an extremely important move on the part of the administration. It is right on policy and it is right on politics. On the radio, on television, and in conversations, what I am hearing is that the community is expressing hope after this announcement.

For years, we have reminded the administration that their stated enforcement priorities of going after criminals, not law-abiding citizens, was not an on-the-ground reality. Last week’s announcement, if properly implemented, will give teeth to this long-stated enforcement priority and give hope to people who [have] lost [their] job as the result of ICE raids.

Clearly in the weeks and months ahead, the Latino community is going to closely follow the implementation of these guidelines to see if they are uniformly applied. And in the meantime, anti-immigrant restrictionists will continue to drive a wedge between Latino voters and the Republican party by hurling racially charged sentiments—like today’s accusation that President Obama is waging a war on “white America”—in hopes of stirring up their own base.