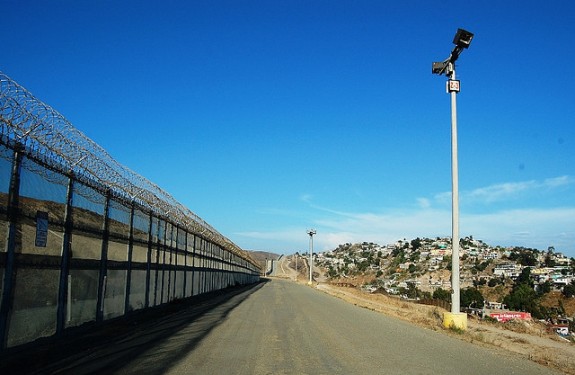 It was clear from the outset that Friday’s Congressional hearing on U.S.-Mexico border security was going to be light on data and heavy on bluster. The tabloid-style title of the hearing said it all: “A Call to Action: Narco-Terrorism’s Threat to the Southern U.S. Border.” Not surprisingly, it proved to be a largely fact-free performance. The stars of the show, which was staged by the House Homeland Security Subcommittee on Oversight, Investigations, and Management, were two retired generals: Barry McCaffrey, a former Director of the White House Office of National Drug Control Policy, and Robert Scales, a former Commandant of the United States Army War College.

McCaffrey and Scales were called before the subcommittee to discuss their recently released report, Texas Border Security: A Strategic Military Assessment, which was commissioned by the Texas Department of Agriculture and the Texas Department of Public Safety. The report is 182 pages of shrill and alarmist rhetoric which relies upon anecdotes, hearsay, and innuendo to portray the U.S. side of the U.S.-Mexico border as a seething cauldron of violence and anarchy. According to the report, Mexican drug cartels, working in concert with U.S.-based Latino gangs, are trying to create a “sanitary zone” along the U.S. side of the Texas-Mexico border that the cartels can use to escape Mexican law enforcement. As a result, the report says: “Living and conducting business in a Texas border county is tantamount to living in a war zone in which civil authorities, law enforcement agencies as well as citizens are under attack around the clock.”

This is a rather remarkable claim in light of the actual crime statistics coming out of border regions in the United States. For instance, a July 18 story by USA Today presented the findings of a comprehensive analysis of “crime data reported by more than 1,600 local law enforcement agencies in four states.” This analysis “found that rates of violent crime along the U.S.-Mexico border have been falling for years—even before the U.S. security buildup that has included thousands of law enforcement officers and expansion of a massive fence along the border.” Moreover, “U.S. border cities were statistically safer on average than other cities in their states. Those border cities, big and small, have maintained lower crime rates than the national average, which itself has been falling.” Finally, the FBI’s “southwestern offices identified 62 cartel-related kidnapping cases on U.S. soil that involved cartels or illegal immigrants in 2009. That fell to 25 in 2010 and 10 so far in 2011.”

According to McCaffrey and Scales, statistics such as these aren’t valid. Why? Because so many witnesses to violent crimes in border regions are afraid to come forward, and because the federal government misclassifies so many cartel-related crimes. However, the report offers no hard evidence to support this bold claim. Nor does it offer evidence to support the over-the-top conclusion that “criminality spawned in Mexico is spilling over into the United States. Texas is the tactical close combat zone and frontline in this conflict. Texans have been assaulted by cross-border gangs and narco-terrorist activities.” Another witness at the hearing—Sylvia Aguilar, Chief Deputy in the El Paso County Sheriff’s Office—described statements such as these as “extreme exaggeration.” That’s the polite way to put it.

A few subcommittee members added to the hyperbole of the hearing with stories of Hezbollah fighters hiking through the deserts of the southwest. But, in fairness, the hearing raised some valuable points during those rare moments when it managed to break free of hysteria—such as the need for U.S. and Mexican authorities to join forces to bring down the drug cartels. And the need to target the guns and money headed into Mexico to the cartels, rather than just the drugs and people coming into the United States. These are points which have been raised by other experts on U.S.-Mexico border issues.

Unfortunately, the hearing was as farcical as the report it showcased. Both abandoned any pretense of balance and objectivity. Both seized upon the most dramatic stories they could find while ignoring the best available evidence. In short, politics at its worst.