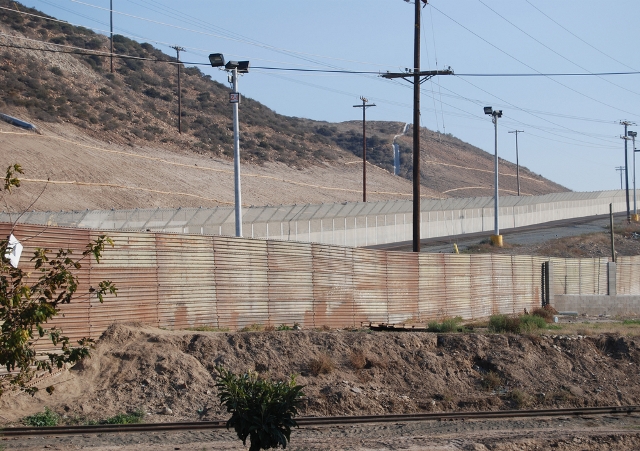 The elections have produced nothing short of an immigration epiphany among some conservative commentators and politicians. Spurred by the electoral beating that Republican candidates suffered at the hands of Latino voters, pundits and lawmakers who once advocated an enforcement-only solution to the problem of unauthorized immigration are now talking about a pathway to legalization. While this new-found pro-legalization stance is highly commendable, it is being coupled with distinctly old-fashioned notions of border security. Legalization programs are being proposed along with border walls as the solution for our border-security weaknesses. However, walls which try (and fail) to keep people out of the country won’t make us safer. The real target of border-security measures should be the cartels that smuggle immigrants, money, drugs, and guns across the border—not the immigrants, money, drugs, and guns themselves.

The change of heart among many prominent conservatives when it comes to immigration reform has been striking. For instance House Speaker John Boehner now says that a “comprehensive approach” to immigration reform “is long overdue.” Charles Krauthammer writes that the Republican Party’s electoral woes can be fixed by “a single policy change: Border fence plus amnesty. Yes, amnesty. Use the word. Shock and awe—full legal normalization (just short of citizenship) in return for full border enforcement.” Likewise, Sean Hannity says that his views about immigration have “evolved” and that we have “got to get rid of the immigration issue altogether. It’s simple to me to fix it. I think you control the border first. You create a pathway for those people that are here. You don’t say you’ve got to go home.”

In other words, what Krauthammer and Hannity call for is legalizing (nearly) everyone who has gotten into the country without authorization so far—and then, somehow, blockading the entire border to prevent anyone else from getting in. From this perspective, the border is like a line of sandbags keeping out the torrent of people and drugs that would otherwise flood into the United States from Mexico. However, the smuggled people and trafficked drugs are not the primary threat; it is the transnational criminal organizations, or “cartels,” that do the smuggling and trafficking that pose the greatest danger. And an effective approach to border security would dismantle the cartels before their operatives even reach the physical border between the United States and Mexico.

This approach to border security, in which the focus is on the smugglers rather than what they smuggle, has been well articulated by Former Arizona Attorney General Terry Goddard in a series of reports for the IPC. Goddard writes:

“Going after the contraband product or smuggled people, as this country has been doing for years, is destined to be an endless chase. The cartels will just regroup and continue operations, learning from their mistakes. If we are serious about stopping the threat on the border, we have to dismantle the criminal organizations that carry the contraband and take away the tools that make them so effective.”

The way to do this, says Goddard, is by going after cartel organizations from every possible angle:

“Whatever makes the cartel organizations strong must be attacked. Their communication systems must be cracked, jammed, and shut down. Their leaders must be identified, arrested, and incarcerated. Most important, the illegal flow of funds across the border into cartel pockets must be disrupted, interrupted, and stopped.”

Similarly, Josiah McC. Heyman, Chair of the Department of Anthropology and Sociology at the University of Texas, El Paso, calls for “an intelligence-driven approach to homeland security, rather than a mass migration enforcement approach.” In a report for the IPC, Heyman reminds us that “the 9/11 terrorists came through airports with visas…They did not cross the U.S.‐Mexico border.” The lesson to be learned from this is that “fortified borders cannot protect us from all security threats or sources of harm.”

But there are more effective ways to safeguard national security:

Fortifying the border in the hope that it can somehow be physically “sealed” is a hopeless quest. And it is not the most effective way to enhance national security or public safety. Conservatives who are rethinking their position on legalization should also rethink their stance on border security. Criminal syndicates are the threat, not unauthorized immigrants.