The Charismatic Leaders Behind Immigration Reform 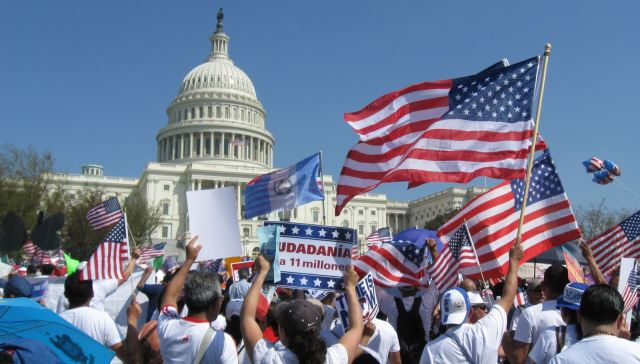 The tens of thousands of people who gathered Wednesday in front of the Capitol to rally for comprehensive immigration reform had two clear messages for Congress: reform must include a direct path to citizenship for the 11 million undocumented immigrants currently living in the United States, and “The Time Is Now.”

As the rally filled the Capitol’s west lawn, a bipartisan group of senators worked furiously on final negotiations on the comprehensive immigration reform bill that should be introduced early next week, according to news reports. “We are writing the bill as we speak,” said Sen. Robert Menendez (D-NJ), who is a member of the Senate’s Gang of Eight. The Los Angeles Times reports that the bill’s first draft is about 1,000 pages, but not all senators have signed off on every section, with provisions related to agricultural workers and border security still being worked out. Yet they are close, Sen. Richard Durbin (D-IL) said after a briefing yesterday. “We are closer now than we have been in 25 years for serious immigration reform,” he said. “This president is behind it. And there is a strong, growing bipartisan effort in the Senate to support it. We hope that the House will do the same.”

While those at the rally had a clear message, they did not speak with a single voice. Attendees came from across the country and represented a range of groups, both old and new members of a growing coalition in support of immigration reform. Busloads of supporters came from states as far away as Michigan, Florida, and Alabama. Participants wore colorful t-shirts and carried the banners of labor unions, women’s and business groups, Latino, Asian and African coalitions, as well as LGBT organizations.

As an NPR report analyzing the immigration reform movement put it, the movement’s success may very well lie in how “decentralized” it is. While there are many issues at stake, the genius of the movement is that it has not been designed to be about “one person, or group or ethnicity,” but rather about the greater whole. And as one rally participant interviewed for the NPR piece put it when asked who the leader of the movement was, she replied, without hesitation, “the people.”

The wide range of issues at stake in immigration reform also explains why it has been so hard to get a comprehensive bill and why these bills end up being 1,000 pages long. The interlocking puzzle pieces of immigration reform are tricky, and it is critical to put them together right. One issue cannot be addressed without impacting others and all of them must ultimately work together seamlessly. That is why this bill has taken so long to produce and why negotiations can be tricky. So as the Senate hammered out the final details, the rally participants showed their support and appreciation for the bipartisan work being done, while continuing to apply pressure on lawmakers to get it done as quickly as possible and not to forget any of them in the process.