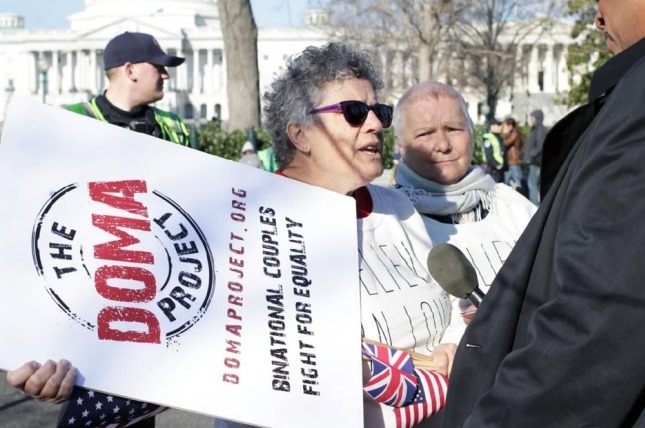 On June 26, the Supreme Court issued its decision in the case of United States v. Windsor, in which it struck down section 3 of the Defense of Marriage Act (DOMA), which defined marriage as between a man and a woman for all federal laws.  This law meant that the immigration agencies would not recognize lawful, same-sex marriages for any immigration purpose. Since the Court’s decision, the Obama administration has moved rapidly to allow U.S. citizens to petition for immigration benefits for their spouses, providing hope to an estimated 28,500 bi-national same-sex couples in the United States who might otherwise be separated by our immigration laws.

Secretary Napolitano immediately issued a statement applauding the Supreme Court decision and declaring that DHS would take steps to implement the ruling and ensure that “all married couples will be treated equally and fairly.”   In fact, the very day of the Supreme Court decision, a New York immigration judge stopped the deportation of a Columbian man based on his same sex marriage to a U.S. citizen.

The immigration agency also is taking steps to reverse decisions that were issued prior to the Supreme Court’s decision.  The day after the decision, Alejandro Mayorkas, the Director of U.S. Citizenship and Immigration Services (USCIS), stated that his agency had maintained a list of marriage cases that had been denied since the Obama administration had stopped defending DOMA in 2011, and that it would reconsider the cases in accordance with the change in law. Just two days later, the first green card was issued to a same-sex spouse of an American citizen.  The beneficiary, Traian Popov, is a Bulgarian immigrant who lives with his American spouse, Julian Marsh, in Fort Lauderdale, Florida.  A green card was awarded today, July 15, 2013, to Karin Bogliolo, in San Jose, California, making Karin the third gay immigrant to become a lawful permanent resident based on a same-sex marriage. Karin, 72, a U.K. citizen, and her U.S. citizen spouse, Judy Rickard, 65, have fought for years to stay together and will never again be separated by U.S. immigration law.

The demise of DOMA’s definition of marriage has enormous benefits for same-sex spouses, even beyond green cards. It will also give same-sex spouses access to countless other immigration benefits, like derivative visas for spouses of holders of nonimmigrant visas like H-1B or L visas, hardship waivers for people who have been deported or barred from reentry, eligibility for cancellation of removal, 212(h) hardship waivers of minor offenses, reopening of removal orders, and other considerations reserved for the spouses of U.S. citizens. These benefits will enable thousands of bi-national same-sex couples to return to the U.S. after having spent years in exile abroad or after being separated from their life partners and families.

However, the fall of DOMA does not mean all immigration problems have been solved for same-sex couples. Same-sex marriage is currently legal in only 13 states (California, Connecticut, Delaware, Iowa, Maine, Maryland, Massachusetts, Minnesota, New Hampshire, New York, Rhode Island, Vermont, and Washington) and the District of Columbia. Although USCIS respects the legality of a marriage based on the place of celebration, if a couple cannot travel to a state or country where they can legally marry, they may be out of luck. Foreign nationals who are in immigration detention in states that do not allow same-sex marriage, who are trapped in countries that persecute homosexuals, or who cannot move to a jurisdiction that allows same sex marriage for any reason, may not be able to marry their U.S. citizen partners and obtain immigration benefits.

The Administration has sent a positive message by acting quickly to implement the Supreme Court’s decision.  For many same sex couples the fear of deportation and separation from loved ones will finally be removed. Hopefully, these actions taken over the first few weeks after the Court’s decision will be followed by further progress in the struggle for marriage equality and equal immigration rights for all families.