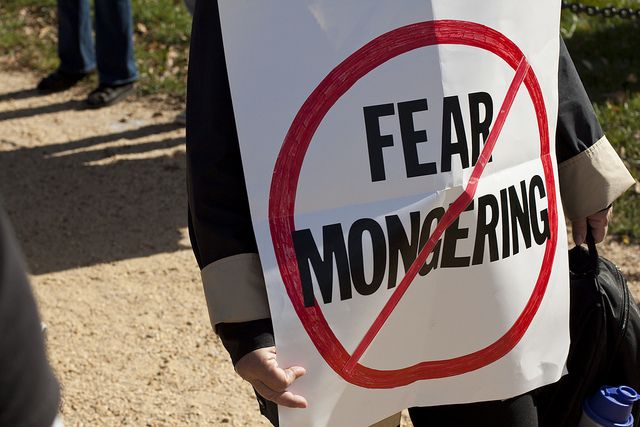 Here’s how an immigration rumor gets started. Take one local Fox news station, mix in a bunch of undisclosed sources complaining about asylum seekers at the Otay border crossing, add in some inflammatory comments from the chairman of the board of the Center for Immigration Studies, and just wait for the story to get blown up and out of proportion by anti-immigrant-fed media sources. For added zest, make sure the story airs shortly after a highly publicized event, like the detention and release of the DREAM9 at the Mexican border, which can be easily mixed up and conflated into some kind of threat to the country’s integrity and security.

This is what happened over the last week with a claim that Mexican nationals were shutting down the Otay border crossing by demanding asylum based on a fear of persecution from drug cartels. Within days, the unsubstantiated and unconfirmed rumors were picked up by various media outlets and ultimately twisted into a declaration from Kris Kobach that immigration reform advocates sought to use the asylum system to force the country to accept the return of 1.7 million people removed from the U.S. to Mexico. Kobach linked the release of the DREAM9—a group of DREAMers who left and then attempted to re-enter the U.S, were detained, and later released pending asylum hearings—into the other rumors, alleging that the DREAM9 were the model for hundreds, if not thousands of copycat claims.

The story is in danger of snowballing and has already led to a number of myths and misconceptions about the U.S. asylum system and immigration reform. Eleanor Acer, head of the Refugee Protection program at Human Rights First, systematically debunked many of these myths in a recent post, explaining the steps behind a credible fear determination and arguing that it is neither an easy nor a sure way of entering the United States. As Acer explains, persons at a port of entry who express a fear of returning to their homeland can only apply for asylum if they pass a credible fear screening interview. And while the initial screening interview is a fairly low threshold test, the standard for a grant of asylum is much higher and far more difficult. In fiscal year 2012, Mexico for this first time ranked in the Department of Justice’s top 25 at 17 behind countries like China, Pakistan and El Salvador. However, the cases approved were less than 1.6% of the total asylum grants issued before an immigration judge and less than 2% of asylum grants issued by USCIS asylum officers. These low asylum grant rates hardly support the claim that Mexicans are “gaming” the asylum system.

That’s not to say that we might not see an increase in Mexican asylum claims in the coming years, as violence by drug cartels, which the government is unable or unwilling to control, is on the rise in areas like Michoacán. And according to Andrea Guerrero, executive director of the Alliance San Diego, the San Diego border crossings are the busiest in the country. She has learned that roughly 600 people have sought admission to the U.S. and indicated a fear of persecution at the San Ysidro and Otay crossings in the last 20 days, many of them from Michoacán. They are not, however, raising claims based on the DREAM 9, Guerrero told ImmigrationImpact:

We are NOT seeing others like the Dreamers [DREAM9] claiming asylum. I have heard the critique that the Dreamers might have triggered a surge in similarly situated asylum claims, but we are not seeing it. What we are seeing are real threats based on conflicts around the world.

In essence, a real and complicated situation—people fleeing violence and possible persecution in Mexico and elsewhere—has been cynically cast by Kobach and others as a move by immigration advocates to force the administration to admit everyone deported to Mexico back into the country.

Why bother with this type of misinformation campaign? One of the most likely reasons is that it distracts from the growing traction immigration reform is gaining throughout the country. Now that nearly everyone seems to agree that immigrants are good for the country and that immigration reform would be plus for the U.S. socially and economically, the restrictionists have to find another immigration target to instill fear. Stirring up concerns about droves of fake asylum seekers has always proven to be a good fallback, which may just indicate how desperate restrictionists are becoming to seem relevant in a debate that has moved beyond them.