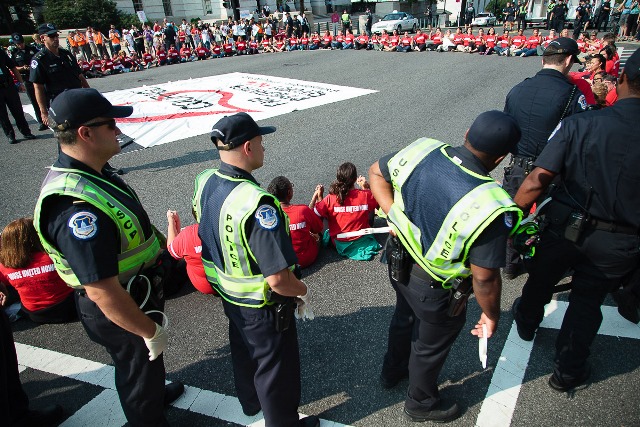 More than 100 women blocked an intersection outside of the House of Representatives Thursday to push for House leaders to finally act on immigration reform. Capitol Police officers arrested the 104 women, including more than 20 who are undocumented, for the act of civil disobedience. More than 200 supporters witnessed the arrests and called on the House to match the women’s courage and pass legislation that will fix the U.S. immigration system. “Each one of us here today understands what incredibly high stakes we are talking about—immigration reform is not just a piece of legislation but the ability for us to take care of our families,” said Pramila Jayapal, co-chair of We Belong Together: Women for Common-Sense Immigration Campaign, at a rally before the arrests.

But more than simply wanting to see Congress approve an overhaul of our nation’s immigration policies, the women demanded reforms that treat women and children fairly. “I refuse to sit by as more women bear the burden of our broken immigration system,” said Ai Jen Poo, director of the National Domestic Workers Alliance who was arrested, before the women’s arrests. As researchers Cecilia Menjívar and Olivia Salcido explain in a report for the Immigration Policy Center, there are specific gender biases in U.S. immigration policies against women, and the barriers these biases create for many women can make it more difficult for them to gain legalization within the current immigration system. These inequalities appear across immigration law, and even as new laws are put into place, stereotypes and assumptions remain unchallenged. They found that any path to citizenship must be open, affordable, and accessible to all immigrant women, including those whose work is unpaid.

And U.S. immigration laws can also harm children. One of the many consequences of an aggressive immigration enforcement system is the separation of children, often U.S. citizens, from their undocumented immigrant parents. The Pew Hispanic Center estimates that approximately 5.5 million children in the United States live in mixed-legal status families with at least one parent who is an undocumented immigrant and at risk of deportation. Josie Molina Macaraeg, an 11-year-old with the Tennessee Immigrant and Refugee Rights Coalition, is one of those children. “I am a U.S. citizen, but I cannot live my life because my father is in deportation proceedings,” Josie said at the rally before her mother was arrested as part of the civil disobedience. “To me, courage is all of the children who go to school every day wondering if their parents will still be there when they come home at the end of the day.”

With a crowded schedule of items the House must debate this fall, some members have argued there might not be time to even consider immigration legislation. Rep. Raúl Labrador (R-ID) told Univision’s Jorge Ramos that the House might not have time this year for the immigration debate. “We don’t know exactly when we’re going to be able to have this debate,” Labrador said. And if it doesn’t happen in 2013, he doesn’t think it will come up again until 2015.

But the bills are waiting, according to House Judiciary Chairman Bob Goodlatte (R-VA), who told WAMU’s Kojo Nnamdi Tuesday that debates over Syria and the debt limit should not deter them from taking up the piecemeal bills that have already passed committee. “Those bills are ready to go to the floor of the House and it’s my hope they come to the floor of the House as soon as possible,” Goodlatte said. That leaves it up to House leadership now. And as Jayapal explained ahead of Thursday’s protest, officials are elected to multitask, so “there’s really no excuse for the House leadership to not move this forward and for the House not to act.”