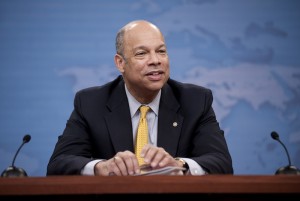 100325-N-0696M-168
Jeh Johnson, general cousel to the Department of Defense addresses the media during a press conference regarding new DoD policy relaxing the rules on the “Don’t ask Don’t Tell” at the Pentagon on March 24, 2010. (DoD photo by Mass Communication Specialist Chad J. McNeeley/Released)