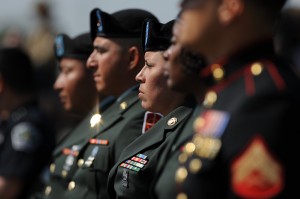 On April 16, 2011, at Camp Mabry in Austin, Texas there were 17 countries represented by 17 new American citizens at this year’s Naturalization Ceremony at the American Heroes Celebration. The U.S. Citizenship and Immigration Service (USCIS) conducts the naturalization ceremony and has naturalized more than 55,000 soldiers, sailors, airmen and Marines since 2001.
(U.S. Air Force photo by Staff Sgt. Eric Wilson)