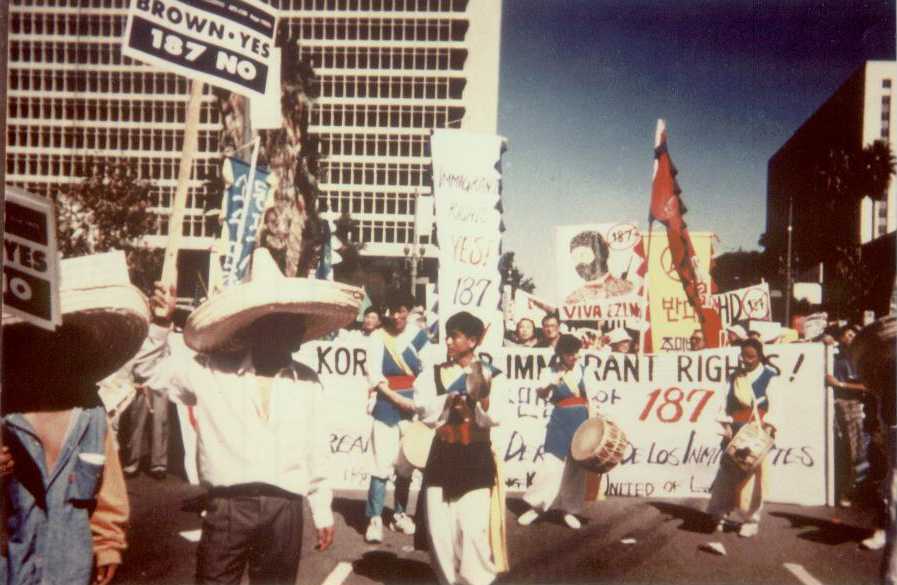 Saturday marks 20 years since 59 percent of Californians voted for a measure designed to reduce the number of undocumented immigrants in the state, a policy that backfired and led to a massive political shift. The measure was Proposition 187, part of 1994’s “Save Our State” initiative, and its repercussions are still being felt today.

Prop. 187 was an effort to curb state expenses by denying social services to undocumented immigrants in California. In 1994, California officials estimated that there were roughly 2 million undocumented immigrants in the state. The measure required state officials to verify immigrants’ status in the U.S., including law enforcement, health, and education officials. Protests against the measure happened across the state before its passage, and it was never enacted after a federal judge issued a temporary order halting Prop 187 three days after voters approved it. Eventually, a federal court struck it down as unconstitutional.

Then-Republican Gov. Pete Wilson strongly supported Prop. 187 and used it as the centerpiece of his re-election campaign in 1994. In his gubernatorial run, Wilson emphasized illegal immigrants crossing the U.S./Mexico border into California and the costs to the state. And it worked for him: he won re-election. However, it did long-term damage to the Republican party in the state.

Twenty years later, that damage is clear. Longtime Latino advocate and founder of Los Amigos of Orange County reflected that “In the long run it [Prop. 187] did us a lot of good…it sparked an ignition, a fire, to do what we wanted to do but were not able to do.” Latino opposition to the ballot initiative galvanized activists, who launched citizenship drives across the state that led to greater political participation. There are 3.7 million Latino registered voters in California, an increase of more than 2 million since the mid-1990s, for example. And 1.7 million Asian and Pacific Islanders (API) are registered voters in California, an increase of 845,000 since the mid-1990s. Prop. 187’s harm to the Republican Party, especially among the growing Latino population in California, wasn’t immediate, but it was long lasting and has become known as the “Prop 187 Effect.”

In alienating immigrant and minority voters through an anti-immigration campaign, these same voters increased their civic engagement to the point where California became a solidly blue state. In 1994, the GOP held 26 of California’s 52 seats in the U.S. House. Starting with the next Congress, Republicans will fill 15 of the 53. A report by Latino Decisions last year attributes this drop to changes that “reshaped California politics in a manner that has made the Republican party nearly irrelevant.” These changes, the report found, included the increase in the Latino share of the electorate and the anti-immigrant agenda (including Prop. 187) that alienated Latino voters.

The United States is in the midst of a major demographic transformation among its electorate. Between 1996 and 2012, the number of Latino registered voters increased by 7.1 million (108.4 percent) and this number will only continue to grow. Thankfully Prop. 187 never saw the light of day and its successors like SB1070 and HB56 have also failed to survive legal challenges. Today’s states are increasingly turning towards progressive pro-immigrant legislation that seeks to integrate and incorporate immigrants into the fabric of U.S. society. Prop. 187 is a piece of history; however, its lesson should not be forgotten, particularly by state legislators when they consider how to calibrate laws that affect immigrant communities.