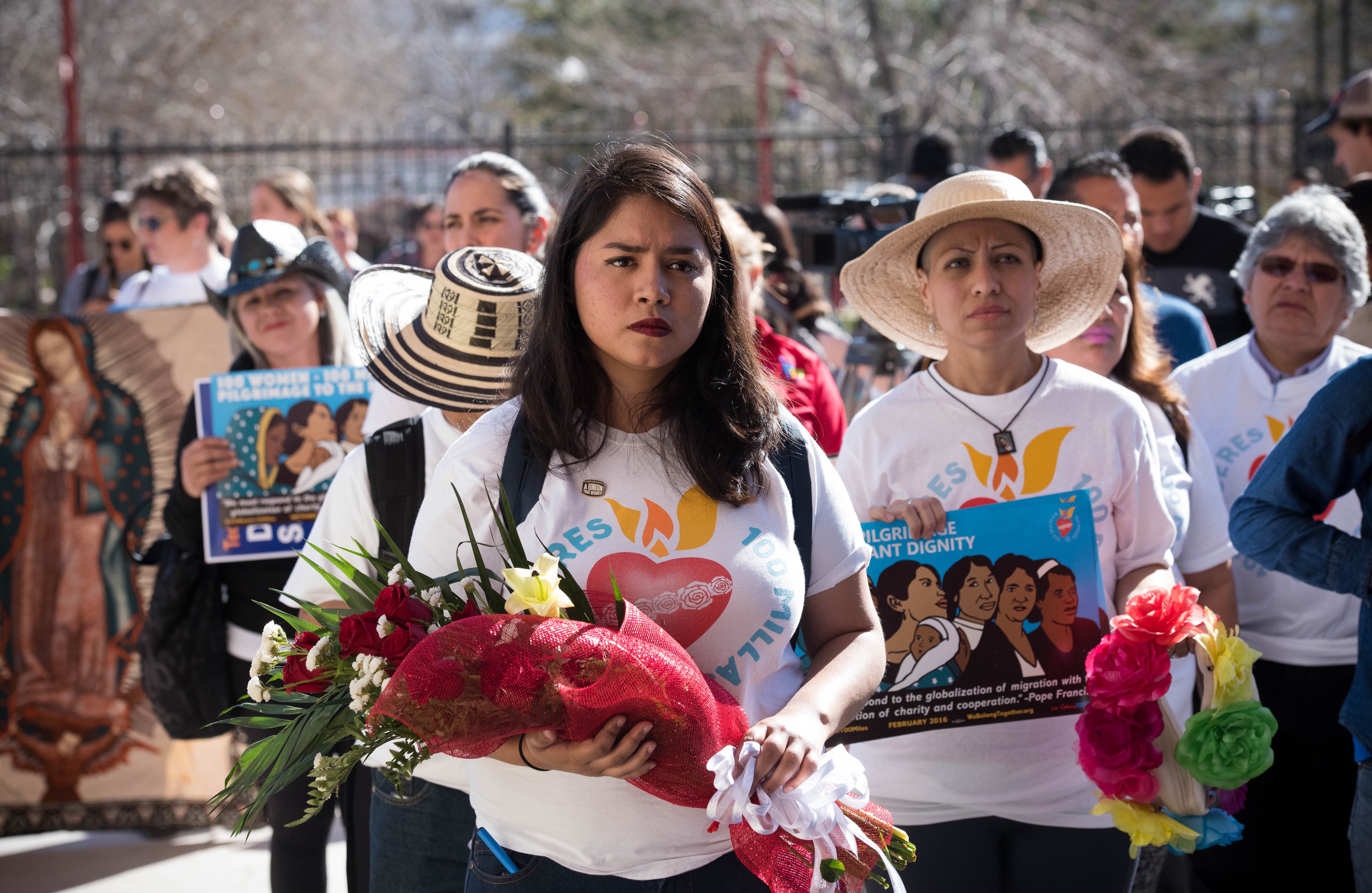 In anticipation of Pope Francis’ visit to the U.S.-Mexico border this week, a band of women will begin a day-long pilgrimage from Ciudad Juarez, Mexico, to El Paso, Texas. They hope to bring attention to the inhumane and unjust immigration enforcement practices taking place every day in the United States.

The women represent We Belong Together, a campaign formed by the National Domestic Workers Alliance and the National Asian Pacific American Women’s Forum. Their pilgrimage today coincides with Pope Francis’ trip to El Paso, Texas on Wednesday where he will “walk to the Rio Grande, within earshot of the U.S.-Mexico border. There he will lay flowers and pray in remembrance of the thousands of migrants who have died in the desert on both sides of the border.”

According to the Pima County Office of the Medical Examiner in the past 15 years, more than 2,200 individual remains have been recovered of those who died while crossing the U.S.-Mexico border in the Tucson area.

This Bishop of the Catholic Diocese in El Paso, Mark Seitz, predicts the Pope also will address the need for greater compassion towards Central American refugees, including large numbers of children, as well as immigrants who are simply trying to take care of their families and are contributing to the U.S. economy.

“In July 2014, at the height of the crisis, he [the pope] wrote to state and church authorities in Mexico about the issue, stating that unaccompanied children fleeing violence should be ‘welcomed and protected.’ In that letter, he added that governments have a special responsibility to protect these vulnerable persons. It is likely that the pope will repeat this message, but much more loudly and publicly. Beyond the refugee crisis, the pope also will show his support for immigrants seeking to survive and to support their families, the people who perform the menial yet vital jobs in the U.S. economy.”

The women will carry banners and flowers, and will make a stop at a federal courthouse in El Paso to view an Operation Streamline hearing. Operation Streamline is where the federal government prosecutes migrants in large group hearings for unlawfully entering or reentering the United States. These mass convictions happen with little due process and often result in sending immigrants—whose only crime is violating the immigration laws—to private prisons on the U.S. taxpayer’s dime. According to Border Patrol estimates, over 279,000 individuals have been referred for prosecution from December 2005 to March 2014.

Last September, many of these same women who walked 100-miles from a detention center in York County, Pennsylvania, where women and children are held in a family detention center, to Washington, DC, when the Pope visited the United States.

The nation normally looks to policymakers and politicians to devise solutions to our nation’s most pressing challenges. However, given the recent policy and political responses to our immigration and refugee challenges, which include congressional inaction and increased family detention and raids, then perhaps now is the perfect time for a reminder from moral authorities that human lives are at stake and responses should be grounded in compassion and humanity.