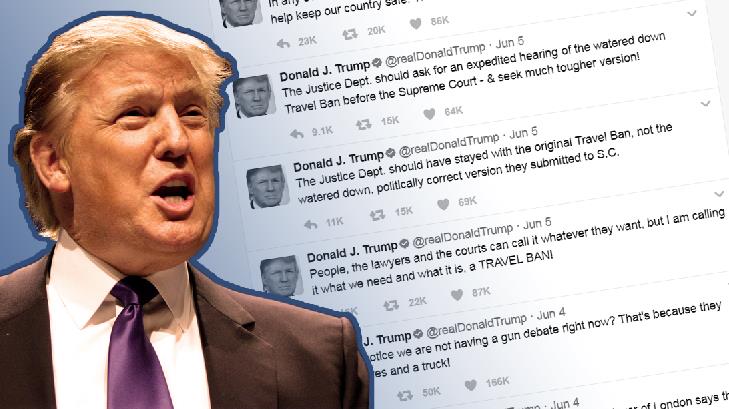 President Trump reignited discussion around his controversial travel ban through a series of early morning tweets on Monday, in a move legal experts say could ultimately cripple his administration’s chances of restoring the ban through the Supreme Court. In these tweets, the president blew a giant hole in his legal case when he insisted that his immigration executive order be called a “travel ban.”

“People, the lawyers and the courts can call it whatever they want, but I am calling it what we need and what it is, a TRAVEL BAN!” Trump’s tweet declared.

Legal experts believe Trump’s latest tweets will likely destroy any possible chance of winning at the Supreme Court. The Department of Justice (DOJ) has asked the high court to hear the travel ban case, which has been struck down multiple times by lower courts.

But why are the president’s tweets such a legal foot-in-mouth moment?

For starters, the language is in direct contrast to what Trump’s lawyers have been arguing all along—that the executive order is not a ban. Trump’s aides have likewise defended the order, reiterating that it is merely a “temporary pause” that allows for “extreme vetting.”

Admitting that the executive order is indeed a travel ban puts the administration in a precarious position—federal courts across the country have considered the president’s own statements, tweets, and interviews when ordering a freeze on the ban.

DOJ attorneys argued, however, that some of Trump’s statements should not count as evidence. For instance, they reason that Trump’s proposal for a “Muslim ban” on the campaign trail should not be taken into consideration now that he is president. Only the text of the order itself, they say, should be analyzed in court. But there will be no need for the courts to reach back to his candidacy now when he is providing them with new statements that contradict DOJ lawyers.

Attorneys of varying political stripes appeared to draw the same conclusion about the ill-fated tweets.

George T. Conway III, who was Trump’s nominee for assistant attorney general for the civil division before withdrawing last week, commented on Twitter: “These tweets may make some ppl feel better, but they certainly won’t help the [Office of the Solicitor General] get 5 votes in [the Supreme Court in favor of the executive order], which is what actually matters.” Borrowing from Trump’s own rhetoric, he closed out the post with a simple declaration: “Sad.”

Omar Jadwat, an American Civil Liberties Union lawyer challenging the order, shared similar sentiments: “It just adds to the mountain of already existing evidence that the government has had to ask the court over and over to ignore. Blinding the courts to a reality that everyone else is aware of is never an attractive position, but is especially problematic when you have to ignore in real time what’s being said by the president of the United States.”

Trump’s last attempt to push his travel ban through the courts ended with the judges concluding that it “drips with religious intolerance, animus, and discrimination.” Should Trump’s telling tweets be considered again, the Supreme Court ought to find the same levels of bigotry in plain sight.