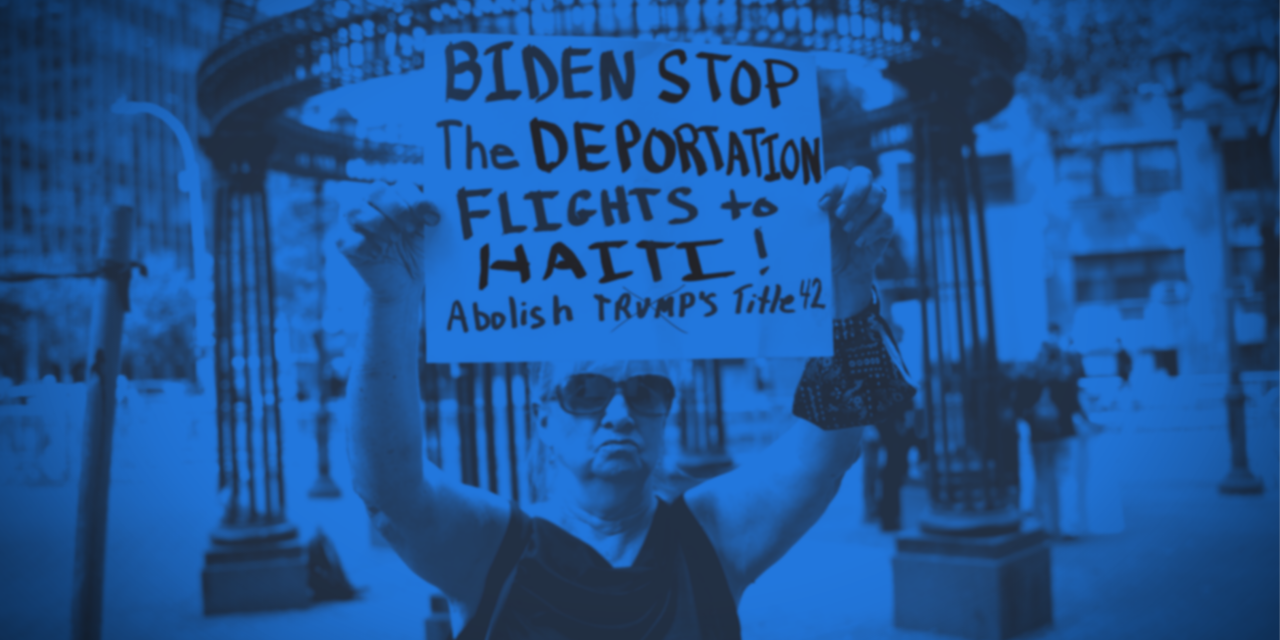 In September, nearly 15,000 Haitians arrived near Del Rio, Texas seeking asylum in the United States. But rather than allowing them to seek protection, as is their right under United States law, the Biden administration instead began a process of mass expulsions to Haiti.

With expulsions to Haiti finally slowing to a trickle  after 70 flights since September 19, more than 7,500 people who waited in the Del Rio camp to access the asylum process have now been expelled back to Haiti. Half were women and children. With more Haitians on the way to the U.S. southern border, the Biden administration has ignored intensive criticism of their actions and indicated that mass expulsions would  continue.

All asylum seekers who are physically present on U.S. soil are supposed to be given the right to apply for asylum. But since March 2020, the Trump administration, and now the Biden administration has been summarily “expelling” asylum seekers under a policy known as “Title 42.” Under Title 42, even those who are fleeing persecution can be summarily expelled without ever seeing a judge.

The Biden administration has repeatedly insisted that Title 42 is justified by public health rationales, even while Dr. Anthony Fauci has acknowledged that immigrants are not the reason for the United States’ continued struggle with COVID-19. Other public health experts have long said that alternate measures like rapid-testing and vaccination are available that make Title 42 unnecessary.

For the Haitians who arrived in the Del Rio camp, random choices by the Border Patrol agents at the scene meant the difference between a chance at safety and deportation back to a country in collapse. Without rhyme or reason, outcomes differed from one family to the next, to the extent that some peoples’ fates might as well have been decided by the roll of a die.

For the smaller group of people who were lucky enough to avoid expulsion, the Border Patrol released them directly from the border with little guidance on the next steps in the asylum process. For the larger group of people who were unlucky, Border Patrol agents took them into custody, held them in jail cells for days, then deported them to Haiti in handcuffs and shackles.

The Biden administration promised that it would provide $5.5 million in aid to Haiti to help them manage the new arrivals. But that aid has not yet been provided. Most people received just $100 in cash after arriving back in Haiti. Meanwhile, the Biden administration has already paid $15 million to private prison company GEO Group for organizing most of the expulsion flights.

The ugly reality of the mass expulsions has received widespread condemnation from human rights advocates, members of congress, and even government officials themselves. On October 7, Daniel Foote, special envoy to Haiti until he stepped down last month over the mass expulsions, testified in front of Congress. He indicated that the Biden administration did not consult with him prior to beginning mass expulsions, and that he believed that “Deportation back to Haiti is not the answer right now.”

Similarly, Harold Hongju Koh, a highly respected human rights lawyer who in the 1990s helped lead lawsuits against the H.W. Bush and Clinton administrations for denying Haitians the right to seek asylum, stepped down from his position at the U.S. State Department in response to the expulsions. In his resignation letter, Koh called the use of Title 42 “illegal and inhumane,” and declared that Title 42 “simply is not worthy of this administration that I so strongly support.”

With at least 60,000 Haitians at various stages of the journey to the United States, the Biden administration clearly views expulsions as a necessary evil to deter more migrants from coming. Despite coming into office with a stated goal of eventually restoring access to humanitarian protection at the border, the administration has shown its willingness to sacrifice the safety of all those who seek protection in the meantime. And for the Haitians who found themselves shackled and expelled to a country that they hadn’t been to in years (if ever), their treatment echoed the same harsh tactics used by presidential administrations for decades against Black migrants.