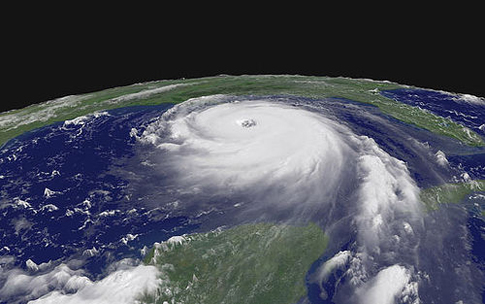 The response of New Orleans’ immigrants to Hurricane Gustav is just another gross example of how attrition through enforcement doesn’t work. A growing number of immigration raids, arrests and deportations are driving immigrants deeper into the shadows–even if it means ignoring evacuation orders and braving a deadly tropical storm.

Immigration and Customs Enforcement (ICE) released a statement saying that it wouldn’t be conducting any immigration enforcement activities in conjunction with Hurricane Gustav evacuation procedures, but many immigrants were either unconvinced or unaware of ICE’s notice. Advocates said there was not enough time to prepare immigrant communities once the DHS press releases were issued. “We didn’t have enough people to go into the neighborhoods where we know Latinos are living,” Lucas Diaz told the Agence France-Presse. Many illegal immigrants became wary when they realized they would be asked to register at evacuation points for tracking purposes. “The government didn’t give people assurances that they would be returned to New Orleans” and not deported,” Jacinta Gonzalez, a day labor organizer with the New Orleans Workers Center for Racial Justice, said. “Just sending out press releases the day before the evacuation isn’t going to work.”

Hurricane Gustav claimed only a few causalities as it weakened after battering the Caribbean Islands. Yet, with as many as 30,000 illegal immigrants living in New Orleans–many who feared ICE and decided to stay–the death rate could have been horrendous.

New Orleans immigrants were rightfully skeptical of ICE’s promises–this past spring ICE announced that it would start checking hurricane evacuees for identification and citizenship, stating that “anyone who is not a citizen or is not a legal resident will be held in specially designed areas…that are made to withstand hurricanes.” Memories of the Superdome and gross government mismanagement during Hurricane Katrina haunted ICE’s useless reassurances.

If you force illegal immigrants to choose between possible drowning and certain imprisonment and deportation, a lot of people will take their chances. Family members will stay behind with undocumented loved ones. And people will die.

The “round ’em up” tactics of the Bush Administration’s, even when pulled back, stir fear deep in immigrant communities. Thankfully Gustav blew quietly past. The next several hurricanes on the horizon may not be so cooperative. We can only hope that community groups in the cities and towns where the next natural disaster occurs can assure immigrants–both documented and undocumented–that it’s safe to seek shelter without the government harassing them for papers.

These are the same people who New Orleans has depended on to rebuild the city. Rather than fix our immigration system and provide for legal channels of immigration, our government endangered and terrified the hard working immigrants who came to the US to clean up the Bush administration’s mess.

Last week, New Orleans residents couldn’t imagine anything more frightening than a tropical cyclone that many believed would match the pounding rain and high velocity winds that lead to the devastating and deathly aftermath of Hurricane Katrina. Yet immigrants who made a deliberate decision to risk their lives and withstand the storm had one menacing exception in mind–the US government’s Immigration and Customs Enforcement Agency.

Photo by GISuser.
NOTE: This story first appeared in the Huffington Post.