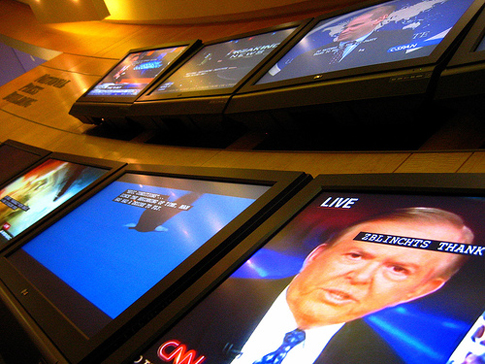 When did extreme become mainstream?–That’s the question immigrant advocates, labor leaders, civil rights groups, and Latino organizations are asking in a full page ad in Capitol Hill newspapers this week as supporters of the Federation for American Immigration Reform (FAIR) march into the offices of Congress, demanding an impractical and hateful agenda of mass deportations, worksite raids, and other expensive and ultimately ineffective approaches as part of their “Hold Their Feet to the Fire” gathering.

The September 10 broadcast of CNN’s Lou Dobbs Tonight program will further stoke FAIR’s flames as it airs live from the site of the annual “Hold Their Feet to the Fire” event, along with dozens (or so FAIR claims) of radio hosts from across the country. Hateful extremism is a difficult challenge and sad reality that our nation faces. However, its appearance in mainstream politics and media marks a disturbing social regression for the United States as hate groups and extremists are allowed to define the debate on immigration.

Controversy over FAIR’s extremist ties dates back to its founder, John Tanton with funds from the Pioneer Fund, a foundation committed to the belief that some races of people are genetically and intellectually superior to other races. Tanton, a pioneer of the anti-immigrant movement and avid supporter of eugenics, continues “defining the debate on immigration” as leader of FAIR and member of its board of directors. The Southern Poverty Law Center has named FAIR a “hate group.” The list of other groups which have earned this distinction from SPLC include: the Ku Klux Klan, American neo-Nazi groups, and the Aryan Nations.

These are the voices which the media is allowing to penetrate the immigration debate with spokesmen like Lou Dobbs to serve as megaphones for their message. Meanwhile, Dobbs is showing his true colors and affirming critics who describe his slanted immigration reporting as being marked by misinformation, extreme rhetoric, hateful attacks, and data from organizations linked to white supremacists. In an extensive report on immigration and cable news, media watchdog–Media Matters Action Network–defined anchors such as Lou Dobbs as overflowing with a “series of myths that feed viewers’ resentment and fears, fostering hostility toward immigrants.”

Dobbs and his allies in FAIR should worry less about holding lawmakers’ feet to the fire, and work instead on getting their heads out of the sand. Immigration policy in America is a pressing domestic priority deserving of sober analysis, not hateful hype. FAIR’s policy agenda is anchored in rounding folks up and keeping them out. An organization so short on policy solutions and so long in stirring intolerance should be getting a cold shoulder, not a warm embrace from CNN and other media outlets.

Photo by ChristyFrank.
NOTE: This story first appeared in the Huffington Post.