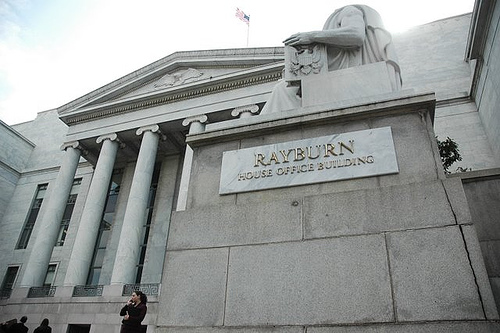 This morning, Republican members of the House Judiciary Subcommittee on Immigration perpetuated the persistent myth of immigrant criminality with their event on “The Toll of Illegal Alien Criminals on American Families.” The event was spearheaded by Lamar Smith (R-Texas), Steve King (R-Iowa) and Howard Coble (R-NC).

Tensions ran high as witnesses ranging from bereaved family members to the President of the Houston, Texas, Police Officers’ Union, to the Chairman of the Prince William County Board of Supervisors made the case that the loss of innocent citizens is a direct result of not cracking down on “illegals” in the US. The witnesses demanded policies that would make life so miserable for immigrants, that they would be driven to self-deport. One witness even received enthusiastic applause after suggesting birth-right citizenship be repealed.

But harsh immigration policies are not effective in fighting crime because—as numerous studies over the past 100 years have shown—immigrants are less likely to commit crimes or be behind bars than the native-born, and high rates of immigration are not associated with higher rates of crime. This holds true for both legal immigrants and the undocumented, regardless of their country of origin or level of education.

It’s not likely a coincidence that the event happened during the same week that the Federation for American Immigration Reform (FAIR) was lobbying Congress and demanding an impractical and hateful agenda of mass deportations, worksite raids, and other expensive and ultimately ineffective approaches as part of their “Hold Their Feet to the Fire” gathering. Smith even thanked FAIR for helping his colleagues connect with and feature some of the same witnesses who participated in FAIR’s rally yesterday afternoon.

Another troublesome dimension of today’s event is that contention and disregard was held for the other side of the debate. Questions were not taken from reporters. Angry attendees of the event ripped the Immigration Policy Center’s press release response out of reporters’ hands.

It is disappointing to see law-makers Smith, King and Coble–along with their fellow congressmen Darrell Issa (R-CA), Brian Bilbray (R-CA), and Duncan Hunter (R-CA) who attended FAIR’s rally yesterday–tarnish the Republican brand by supporting the agenda of FAIR, an organization designated a “hate group” by the Southern Poverty Law Center. It is especially troubling to see law-makers exploit the pain of the victims of these terrible crimes to promote their political agenda. They’re absolutely right that dangerous criminals must be punished, and that immigrants who are dangerous criminals should not be allowed to enter the US or deported if they already are here. But exploiting the profound painful loss of crime victims to spread the myth that immigrants are criminals, by propagating misinformation, is simply irresponsible and disingenuous.