One in Ten Latinos Asked for Papers for LWL: Living While Latino 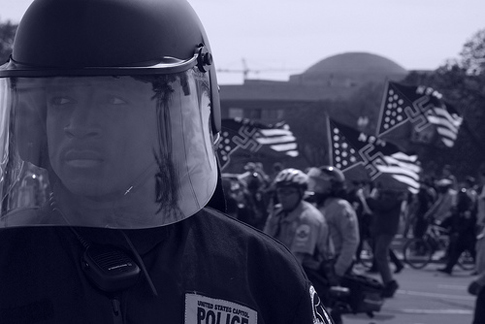 The current climate of undeterred public immigrant-bashing along with an immigration policy of “attrition through enforcement” has cultivated unfettered hatred and bigotry against an entire ethnic population. A recent survey by the Pew Hispanic Center shows its toll: half of all Latinos, immigrant and non-immigrant, say that their situation in this country is deteriorating and is worse now than it was a year ago.

One in seven Latinos are reporting ethnic discrimination in finding or keeping a job and 10% said the same thing about housing. But the most stunning finding is that nearly one-in-ten Hispanic adults–native-born US citizens and immigrants alike–report that, in the past year, the police or other authorities have stopped them and asked them about their immigration status. One in ten Latinos were stopped and asked for “papers.” What can that statistic represent other than a gross abuse of power by federal and local authorities?

Vicious public denunciations of undocumented, brown-skinned immigrants — once limited to hard-core white supremacists and a handful of border-state extremists — are increasingly common among supposedly mainstream anti-immigration activists, media pundits, and politicians and are surely fueling the problems that Latinos are facing. While their dehumanizing rhetoric typically stops short of openly sanctioning bloodshed, much of it implicitly encourages or even endorses violence by characterizing immigrants from Mexico and Central America as ‘invaders,’ ‘criminal aliens,’ and ‘cockroaches.’ In Virginia, a Prince William County and ardently anti-immigrant community task force appointee has suggested spending tax dollars to look into whether “illegal aliens have a preferred breeding season.” He has also referred to undocumented immigrants as “scourge that’s plaguing neighborhoods” and an “invasion of this country.”

The Southern Poverty Law Center (SPLC) has been tracking anti-immigrant rhetoric and activities for several years and has noted a marked upswing in violence against Latinos coinciding with the national debate over immigration policy. Approximately 300 anti-immigrant groups have formed in the last three years, and just this past April, neo-Nazis commemorated Hitler’s birthday by holding an anti-immigrant rally on the U.S. national mall. According to annual hate crimes statistics published by the FBI, anti-Latino hate crimes rose by almost 35% between 2003 and 2006. Of the 1,305 victims of hate crimes motivated by ethnicity or national origin reported to the FBI in 2006, 62.8% were targeted because of anti-Latino bias.

Living in fear of deportation and discrimination and worrying about your livelihood and safety is no way to live and it’s certainly not how Americans expect to live. In fact, it’s the sort of life that our forefathers sought to protect us from. Debate, discussion, and disagreement around the pressing immigration issue are natural, legitimate, and necessary. Hate, fear and vitriol rhetoric are not.

Photo by Streyeder.
NOTE: This story first appeared in the Huffington Post.