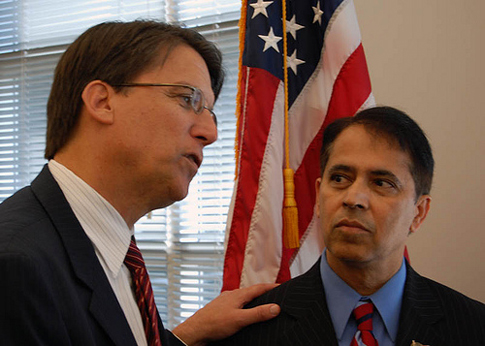 According to the Daily Kos, McCrory–citing the Federation for American Immigration Reform (FAIR)–a fiercely anti-immigrant hate group that is known for its direct ties to John Tanton, a pioneer of the anti-immigrant movement and avid supporter of eugenics–wrote,

How would you like to be one of these kids who doesn’t get pregnant, works hard in school, doesn’t join a gang, goes to church on Sunday, but when they go down to the fast food restaurant, they are told we can’t hire you because we need bi-lingual employees.

In one fell swoop, McCrory bootlicks the hateful sentiments of extremists and loses a new and powerful voting bloc: New Americans. This group of voters, defined as naturalized immigrants and the U.S.-born children of immigrants, have a powerful and highly personal connection to the modern immigrant experience that most other Americans don’t. A new report release by the Immigration Policy Center found New Americans are the fastest growing sector of the U.S. electorate and are likely to play an increasingly pivotal role in elections at all levels in the years to come. And as recent public opinion polls reveal, anti-immigrant political rhetoric is likely to motivate many New Americans to cast ballots in November, but is unlikely to win many votes for candidates like McCrory who are perceived as anti-immigrant.

In fact, 2008 is expected to be a banner year for New American voters due to record-breaking naturalization rates of up to three million new citizens; turbo-charged registration efforts by groups like the We Are America Alliance and “Ya es Hora, Ve y Vota;” and aggressive GOTV efforts in ethnic communities which will likely result in Latino turnout hitting record highs in 2008–surpassing the 7.6 million Latino voters who turned out in 2004.

It also doesn’t help McCrory and other candidates with similar views that anti-immigrant sentiment is a top concern for New American voters. 75% of Latino voters view the immigration issue as important or very important as they see their situation in the U.S. deteriorate due to hateful rhetoric and discrimination. As Henry Fernandez, a Senior Fellow at the Center for American Progress, said:

New Americans — immigrants and the children of immigrants — are changing the face of the electorate. And apparently they aren’t too happy with the way their communities are being treated.

Most immigrants and their children also probably aren’t too happy about the prospect of someone like McCrory representing them–a displeasure that will most likely voice in the ballot box.