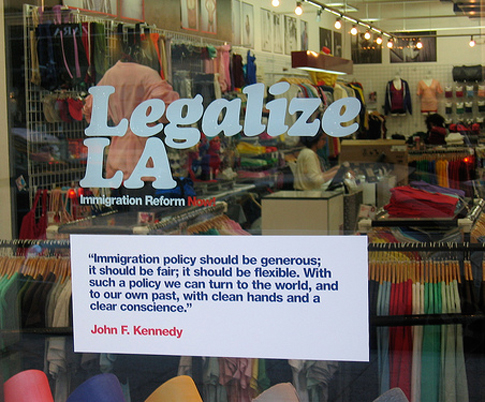 American Apparel–the U.S.’ biggest garment manufacturer–is sick of losing good workers to a broken immigration system. That’s why the company is raging its “Legalize LA” campaign and standing up for the legalization of the hard-working, but undocumented immigrants living in our country today.

Most recently, American Apparel released a memo as part of a voter registration drive challenging the silence of Barack Obama and John McCain on the issue of immigration stating, “It is essential that we do not idly stand by in this next election.”

Like many businesses, American Apparel is arguing that there is a definite economic benefit to immigrant labor that could be amplified by comprehensive immigration reform. Currently, federal regulations easily ensnare employers who unwittingly find themselves with undocumented workers, despite their best attempts to comply with confusing and often contradictory rules.

American Apparel is also a testament to the fact that a lot of companies are not bad apple employers that exploit immigrant labor and drive down the wages and working conditions of all workers. In fact, American Apparel proudly describe its products as “sweatshop free,” providing its workforce, both immigrant and non-immigrant, with:

“These people don’t have freedom of mobility, they’re living in the shadows,” Canadian immigrant and American Apparel founder and chief executive, Dov Charney told the New York Times. “This is at the core of my company, at the core of my soul.”

From New York Times: Politics Wrapped in a Clothing Ad.