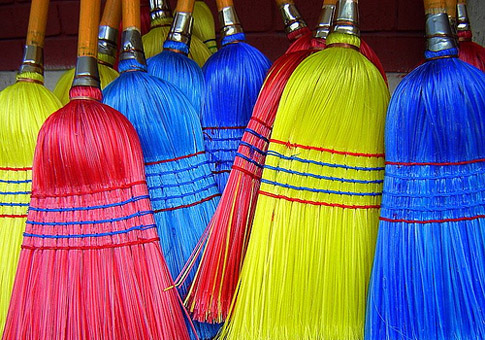 The irony of all ironies in the current Administration’s fight against undocumented immigration came today when news broke that Department of Homeland Security (DHS) head, and immigration hard-liner, Michael Chertoff, was himself paying undocumented immigrants to clean his house.  In fact, according to the cleaning company’s owner, James D. Reid, “workers sailed through the checks.”

Tom Barry of the TransBorder Project of the Center for International Policy says:

Despite a wave of lawsuits, investigative reports criticizing DHS detention practices, and protests by immigrant advocates, Chertoff has forged ahead with the controversial border fence, the large-scale jailing of illegal immigrants, and programs to enforce immigration law at the workplace.

Not only is he forging ahead, Chertoff continues to “trumpet” the results of raids, deportations, and efforts to roll out e-Verify in the face of opposition from civil rights organizations, business groups, and a federal judge.  Surely, he will be patting himself on the back as he leaves his Beltway.

Now it’s Reid who finds himself in a costly predicament-he owes the government $22,880 in fines for failing to check identification and work documents and fill out required I-9 verification forms for his employees, five of which worked at Chertoff’s home.  These fines have now run Reid out of business, as Reid is forced to learn the hard lessons of Chertoff’s immigration tactics:

And Reid isn’t the only one.  In the past few years the Immigration and Customs Enforcement agency (ICE, a department of the DHS) has stepped up its enforcement actions, as honest businesses and hard-working immigrants are bearing the “brunt” of DHS’ tactics.

Reid brought up an interesting point: “Our people need to know, our Homeland Security can’t police their own home. How can they police our borders?”  Given the current state of our economy and immigration system, we must look for ways to help all workers and businesses. Chertoff’s hypocritical faux-pa just highlights the need for comprehensive, fair and workable solutions to our immigration system and economic situation.