On this Human Rights Day, a World Made New for Immigrant Workers? 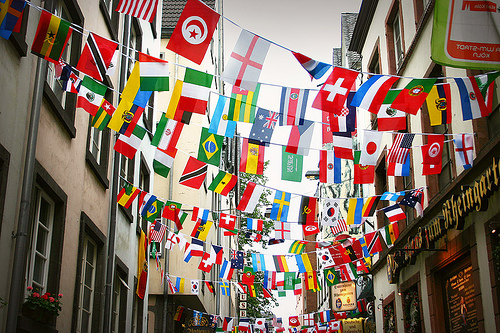 The Universal Declaration of Human Rights (UDHR), considered the magna carta of human rights law, has a lot to say about the human rights of workers, beginning with “Everyone has the right to work, to free choice of employment, to just and favourable conditions of work and to protection against unemployment.”

We should take the time to honor the human rights of those whose highest aspirations are to bring their families into the middle class and the basic labor protections needed for the millions of low-wage, high-risk jobs performed by a largely immigrant workforce who simply seek the human dignity guaranteed by the UDHR.

In this policy climate, at a time when the prospects for immigration reform suggest its right around the corner, we need look no farther than the UDHR for policy prescriptions that ensure immigrant and other low-wage workers a fair shot at decent work and fulfilling the American Dream.

Article 2.  Everyone is entitled to all the rights and freedoms set forth in this Declaration, without distinction of any kind.

Employers should not be allowed, as they are presently, to use immigration status as a club to deny workers’ rights.

Article 4. No one shall be held in slavery or servitude; slavery and the slave trade shall be prohibited in all their forms.

We must adopt effective policies to combat labor trafficking. This includes regulating the international labor brokers who sell the right to work in the United States to vulnerable immigrants — and the U.S.-based employers who use them.  Workers who are detained by immigration officials in the context of labor disputes must be screened as victims of labor trafficking. The United States advises other countries to do this, yet fails to do so even when Immigration and Customs Enforcement is aware that an enforcement action is interfering with labor rights.

Article 23.3.  Everyone who works has the right to just and favourable remuneration ensuring for himself and his family an existence worthy of human dignity.

The federal minimum wage must be restored to its historical level of 50% of average wages, and must cover all workers, with special exemptions, such as those for agriculture, home health care and tipped workers erased. The Department of Labor’s enforcement authority must be beefed up, to send the strong message that wage theft will not be tolerated in America.

Article 23.4. Everyone has the right to form and to join trade unions for the protection of his interests.

Millions of workers are excluded from the protection of the National Labor Relations Act by virtue of the sectors they work in – domestic work and agricultural work, “supervisors” and “independent contractors.” Millions more are prevented from exercising this right by a variety of legal and illegal employer tactics. Congress should pass the Employee Free Choice Act and work towards full rights to organize for all workers.

Article 23.1.  Everyone has the right to protection from unemployment.

Now, more than ever, our families and our economy need the jump-start provided by a modernized unemployment insurance system that matches the needs of today’s workforce, including those employed seasonally and part-time, those unemployed because of family responsibilities, and including unemployed, lawfully present temporary workers from abroad.

Racial profiling is becoming a more prominent feature of our immigration enforcement system, occasioned at least in part by the proliferation of local police acting as immigration agents. While the UDHR says that “No one shall be subjected to arbitrary interference with his privacy, family, home or correspondence,” dozens of cases of such interference occur daily, not only in hot spots like Phoenix Arizona, but across the country.

The UDHR says lots more:  about the right to food, clothing, housing; about the right to health care, the right to education  — all rights that should guide our policy-makers in the new Administration as they seek to solve both our economic crisis and the crisis of our public face in the world. We should start by removing the barriers that rob immigrant and low-wage workers of their basic human rights, or, in the lofty words of the UDHR, “an existence worthy of human dignity.”