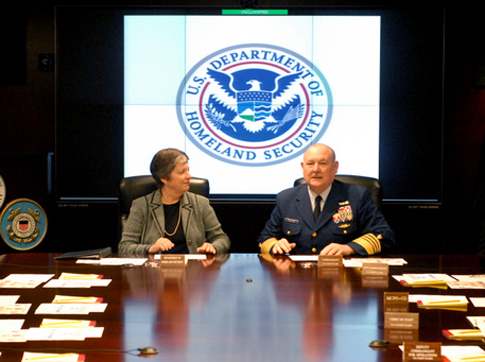 In an interview yesterday with NPR’s Day to Day host, Madeleine Brand, Department of Homeland Security (DHS) Secretary Janet Napolitano thoughtfully outlined the department’s immigration priorities. DHS was recently scrutinized in a report by the Migration Policy Institute (MPI) assessing DHS’s past performance under the Bush administration and offering “recommendations for policy and operational changes.”

In a telephone interview, Napolitano provided pragmatic solutions to DHS’ immigration enforcement mishandlings while being careful not to get ahead of President Obama and Congress on the subject of immigration reform.

Napolitano reaffirmed the need for fair enforcement and rule of law at the border, specifically the need for appropriate manpower and technology. No surprise there. Check. Napolitano also highlighted the need for interior enforcement of unscrupulous employers who are “intentionally going into the illegal labor market and creating a demand for illegal laborers.” Check plus. In a departure from the Bush administration’s ineffective “just build a fence” immigration policy, Napolitano responded to questions about the 700-mile border fence with “you cannot build a fence from San Diego to Brownsville, Texas, and call that an immigration policy.” Underline. Check plus plus. And when asked about federal immigration policy, Napolitano underscored the need to “facilitate the applications of citizenship for those who are entitled to become citizens.” Gold star.

Napolitano deferred to “Congress and the President” when asked about what to do about the 12 million undocumented immigrants currently living in the U.S., a sign that perhaps “Congress and the President” may be getting ready to move on immigration reform. A recent Politico article attributes President Obama’s chief of staff Rahm Emmanuel with “removing roadblocks that stand in the way of some of the legislative agenda benefitting immigrants, ethnic minorities and their advocates,” namely the passage of SCHIP.  Janet Murguia, president of National Council of La Raza, believes Emmanuel is poised for action:

Immigrant advocates await the administration’s review of immigration raids that were stepped up by former President George W. Bush and that terrorized immigrants and even Hispanics who are U.S. citizens. But Emanuel remains “very mindful” of Obama’s campaign pledge to “rise above the fear and demagoguery.”

As Secretary of DHS, Napolitano’s job is to enforce our immigration laws. Thankfully, she has also made it her job to do so in a fair, pragmatic and thoughtful way–NOT by harmful enforcement-only policies. Napolitano is charting a course to enforcement as part of a fair and working immigration system:

We want enforcement of our nation’s immigration laws; we want at the right time to take up the whole issue of immigration; and we want to do what we can administratively to help those who are entitled now to become citizens under our law to get through that process.

Napolitano, unlike her predecessor, is looking to “restore integrity” to immigrants while enforcing our immigration laws and keeping America safe-which, believe it or not, are not mutually exclusive.