The American People are Calling for Change 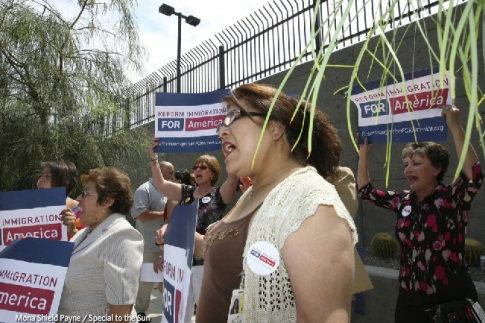 Yesterday the Reform Immigration FOR America campaign kicked off its efforts to mobilize millions of supporters across the country and press for fair, practical, and humane immigration policies.  While small-but-vocal anti-immigrant groups continue to voice their negative and divisive messages, more and more people across the country are speaking out in support of an immigration reform that is consistent with American values and that would benefit American families and the U.S. economy.

Today’s newspapers report on rallies in San Francisco, Boston, Miami, Nashville, Orlando, Pittsburgh, Lincoln,  Las Vegas, Omaha, Augusta, San Bernardino, and Salinas, among others.  Monday’s events will be followed by events throughout the week, culminating with a press conference on Wednesday and a three-day campaign summit in Washington, DC.

The Reform Immigration FOR America campaign brings together immigrants, labor unions, business, religious groups, civil rights organizations, and others all pushing for a common cause—reforming our nation’s immigration laws.  At Monday’s events, participants told stories of how our broken immigration system has affected their families and their lives.

One Orlando high school student expressed her desire for immigration reform by saying, “I want to finish high school and be able to know that I will be able to go on to college. I’m in a situation where I feel a lot of sadness because my future is uncertain.”

Others spoke of the country’s obligation to reform an unjust and dysfunctional system.

Rev. Sonnye Dixon, pastor of Hobson United Methodist Church in Nashville stated,
“There is what I would call an epidemic of xenophobia affecting America… For me, it is a matter of my faith that I am taught, and I believe that I am to love my neighbor, that I am to love the stranger.”

“Families are broken, and people are being treated unjustly,” said Scott Fabean, the vice president of the Pittsburgh group, which includes approximately 40 congregations and organizations throughout the area. “We feel it is a moral issue. God commands us to care for the alien.”

Peter Ashman, the Nevada chapter chairman of the American Immigration Lawyers Association, said the current policy of “throwing more money on Homeland Security to remove undocumented workers is too costly, not workable and un-American.  This broken system, which has enforcement only as its approach, cripples our government’s ability to effectively and efficiently deal with the problem of undocumented workers and families.”

On Monday President Obama will convene a meeting on immigration reform with a bipartisan group of Senators and Representatives to identify areas of agreement and disagreement and to design a plan for moving forward.  The Administration and Congress should pay attention to this week’s activities and recognize that the American people are demanding change.