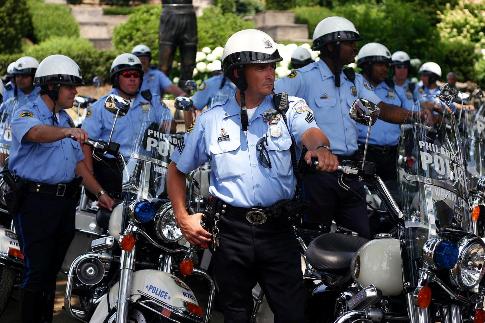 Yesterday, a small group of Utah Minutemen gathered to protest Salt Lake City Mayor Ralph Becker’s and Police Chief Chris Burbank’s decision not to enforce some provisions of SB81—Utah’s immigration legislation that allows the cross-deputization of city officers to enforce federal immigration laws. The legislation is slated to take effect on July 1st.

Utah Minuteman President, Eli Cawley, however, claims that the city’s refusal to enforce SB81 is actually protecting lawbreakers at the American people’s expense.

In their arrogance and wrong-headed insistence on pandering to illegal aliens at the expense of the rule of law and the safety of our people, Becker and Burbank have chosen, by their refusal to enforce SB81, to protect lawbreakers instead of citizens.

Right. This coming from the man who when asked about his “biggest concern” with the “Obama presidency” responded, “Amnesty for illegal aliens because he is one.” Although Cawley claims the group is not racially motivated, several protesters were heard shouting at nearby Latino construction workers with such gems as “Go home!” and “Give us back our jobs!” without knowing anything about their immigration status. Clearly, “race” is not a part of this debate. Wait, how does an immigrant look undocumented again?

Not surprisingly, the protest did nothing to change the minds of Mayor Becker or Chief Burbank, who stand firm in their resolve that enforcing federal immigration policy is not only an ineffectual, costly and difficult program to run, it also hinders police from interacting with the community they have sworn to protect. Instead, Chief Burbank wants a larger, more comprehensive solution to the state’s immigration issues:

Our job is to protect the residents of our city and the federal immigration policy is severely broken. Cross-training would add a tremendous burden on our police, who are not trained to enforce federal policy.

And Mayor Becker and Chief Burbank aren’t the only ones to realize that SB81 and similar programs, such as 287(g), are riddled with problems. At a recent Congressional hearing, police representatives and policing experts testified that 287(g), a federal program known by the provision of the Immigration and Nationality Act that authorizes it, is not working. Police Chief George Gascon from Mesa, Arizona, is a long time critic of police enforcing immigration laws:

Increased political pressure on local law enforcement to reduce undocumented immigration coupled with the Federal deputization of local police to enforce federal immigration statutes is jeopardizing sound and well established policing practices… In some cases [287(g)] is setting the police profession back to the 1950s and 60s, when police officers were some times viewed in minority communities as the enemy.

It doesn’t take a policy wonk to understand what a Police Foundation report suggested last month—“that if local police are perceived as immigration agents, it makes their job much more difficult because immigrants—both legal and unauthorized—are fearful to come forward with important information because they fear the negative immigration consequences of coming into contact with the police.”

Is chasing down undocumented immigrants really the best use of local police departments’ time, energy and limited state resources?  Fortunately, much like Mayor Becker and Chief Burbank, many local police already understand that building bridges with local community members enables them to keep cities safe from violent criminals and that enforcing federal immigration law only serves as a temporary solution to a much bigger problem—a problem better solved by an overhaul of our outdated and broken immigration system.