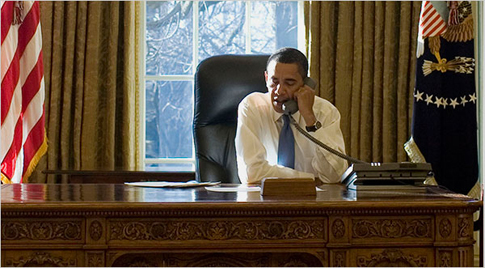 While a bill that would reform our immigration system waits in queue behind other issues, like healthcare and climate change, the new Administration has begun a good faith effort to right some of the most egregious wrongs left by the former White House.

Only a few hundred people were at risk of deportation under the policy, but critics viewed it as one of the most painful consequences of President George W. Bush’s immigration crackdown. Under the current interpretation of federal law, some immigrants whose American spouses had died faced possible deportation because their legal status was in limbo. The clause, known as the “widow penalty,” had resulted in a spate of lawsuits.

Also this month, Attorney General Eric Holder reversed a particularly bad decision made by former attorney general Michael Mukasey which repealed an immigrants’ ability to appeal immigration decisions based on “ineffective assistance of counsel.” As the Washington Independent reported at the time of the decision:

The ruling caused serious problems for immigrants who were entitled to remain in the country but had hired overburdened or simply incompetent lawyers who didn’t know the law, missed a critical deadline or failed to get their client’s full story…Holder’s withdrawal of the decision means that for now, at least, the right to re-open a claim based on ineffective assistance of an attorney is restored.

The integrity of immigration proceedings depends in part on the ability to assert claims of ineffective assistance of counsel, and the Department of Justice’s rule-making in this area will be fair, it will be transparent, and it will be guided by our commitment to the rule of law.

The controversial E-Verify employment verification rule—which was due to become mandatory for all federal contractors—has also been delayed as the Obama administration takes time to review the rule.

Yet despite all these positive signs, there is still much to be done. Those who feel they have no time left to wait are taking matters into their own hands. This week, a group of more than 100 U.S.-born children of immigrants filed suit against President Obama in order to save their parents from deportation. According to the Associated Press:

The children, who gathered Wednesday at the Miami nonprofit American Fraternity to draw attention to their cause, say their constitutional rights are being violated because they will likely have to leave the country if their parents are forced to go. “I came today because I want to stay with my mommy here,” said Sara, who was born in South Florida, but whose mother came from Medellin, Colombia, through Mexico, crossing the Rio Grande on foot nearly a decade ago.

So while scheduling delays and a packed congressional calendar continue to slow action on immigration reform, the New York Times continues to call the White House out on stalling the immigration debate:

Mr. Obama needs to break the stalemate on immigration. And he needs to do it soon…The American people have been far out front of the politicians on this issue, overwhelmingly supporting comprehensive reform. Washington can still catch up. There’s still time. And the country is waiting.