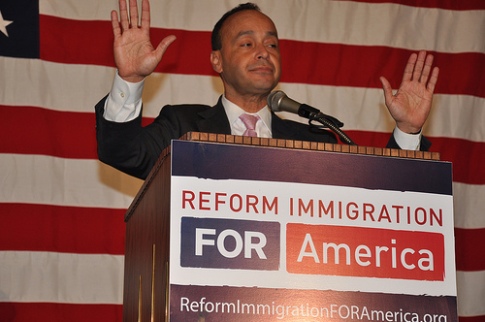 Today, more than 3,000 people from across the nation gathered in Washington, D.C. to demand comprehensive immigration reform. Immigrants and their families, veterans and clergy met with Congressional offices and gathered for an afternoon vigil at the Church of Reformation on Capitol Hill to share stories about those facing deportation, family separation and personal struggles with our broken immigration system. Today’s rally culminated on the west lawn of the U.S. Capitol where Rep. Luis Gutierrez, chairman of the Congressional Hispanic Caucus Immigration Task Force, laid out core principles for a comprehensive reform bill he plans to introduce in the House in the months ahead.

We simply cannot wait any longer for a bill that keeps our families together, protects our workers and allows a pathway to legalization for those who have earned it. It is time we had a workable plan making its way through Congress that recognizes the vast contributions of immigrants to this country and that honors the American Dream. I am preparing such a plan, and will introduce it in the near future.

Although President Obama has prioritized immigration reform, today’s rally is a strong reminder that the public will not let him forget his promises, no matter how many other pressing issues may be on his plate.