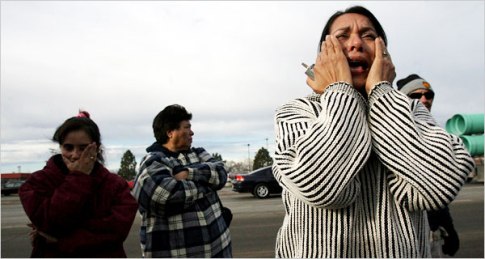 Postville, Iowa—home to one of the largest immigration raids in U.S. history—made headlines again this month when Sholom Rubashkin, owner of Agriprocessors Inc., was convicted of “all but five of the 91 business fraud charges listed in a 163-count indictment.” Although the 72 immigration charges were dropped (since they would have little impact on his final sentence), Rubashkin still faces a total maximum sentence of up to 1,255 years, according to the Des Moines Register. Justice served? Perhaps. But the people of Postville may have a different take on “justice” given the current state of Postville’s crippled economy—an economy that once, like many across the U.S. currently do, depended on immigrants.

The lingering legacy of Postville extends beyond a miscarriage of justice to the decimation of a local economy in the year following the raid. According to Postville, U.S.A.: Surviving Diversity in Small-Town America , the loss of jobs and people also meant steep losses in taxes and revenue:

By May 2009, Postville lost 40% of its pre-raid population, the economy was in shambles, the city government teetered on the brink of financial collapse, and the future of the town’s major employer grew increasingly doubtful with time.

As in many states across the nation, immigrants are vital to Iowa’s economy. According to the Selig Center for Economic Growth, Asian and Latino purchasing power topped $4 billion in Iowa and the business they own had sales and receipts of $745 million. Unauthorized immigrant families also contribute to the local economy—somewhere between $40 million and $62 million in state and local taxes in 2007, according to the Iowa Policy Project. Another study shows that if all unauthorized immigrants were removed from Iowa, the state would lose $1.4 billion in expenditures and $613 million in economic output, not to mention 8,819 jobs.

Other states and communities can learn an important lesson from Postville. Not only will wanton immigration enforcement waste millions of taxpayer dollars, but it will deport and potentially scare away vital members of our local communities. Postville’s crippled economy teaches us that we can’t enforce our way out of our immigration problems. Even with DHS’s re-prioritized enforcement goals, enforcement isn’t a long-term solution. We need immigration reform.

To quote Janet Napolitano, Secretary of the Department of Homeland Security:

Over the past ten months, we’ve worked to improve immigration enforcement and border security within the current legal framework. But the more work we do, the more it becomes clear that the laws themselves need to be reformed.