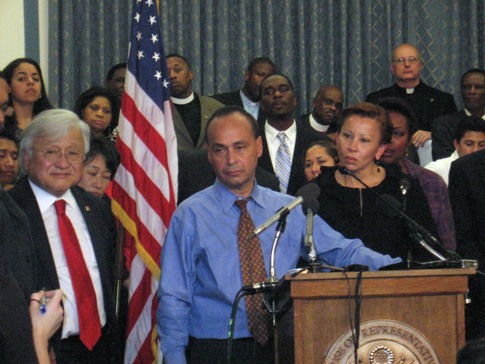 Today, in a room filled with supporters and shouts of “Si, Se Puede,” Congressman Luis V. Gutierrez (D-IL) held a press conference to introduce the Comprehensive Immigration Reform for America’s Security and Prosperity Act of 2009 (CIR ASAP). Congressman Gutierrez introduced the immigration reform bill—which at last count had 89 original co-sponsors including the Congressional Hispanic, Black, Progressive, and Asian Pacific American Caucuses—before Congress heads home for the holidays “so that there is no excuse for inaction in the New Year.”

This is a crisis. It’s a crisis of human and civil rights, it’s a crisis of our economy and our workforce, and it’s a crisis of national security. This is why we cannot wait any longer. The Comprehensive Immigration Reform for America’s Security and Prosperity (CIR ASAP) Act of 2009 is a solution that we, as a nation of immigrants, can be proud of. We’ve waited a long time for this—a workable solution to our immigration crisis.

So what’s in this long-awaited immigration reform bill? The Immigration Policy Center (IPC) released a summary of key provisions in the bill, which includes:

While many more immigration proposals are expected in the House and Senate in the year ahead, Congressman Gutierrez’s immigration reform bill is a good starting point for Congress to thoughtfully and sensibly craft real immigration legislation that seeks to solve our immigration problems—problems that have plagued our broken immigration system for far too long.