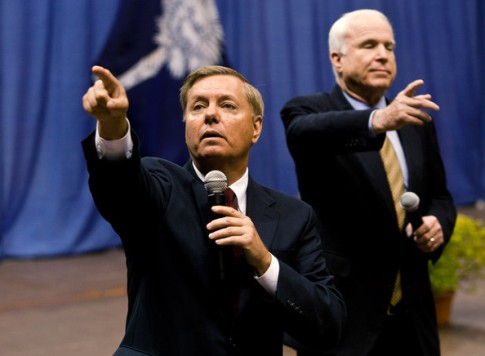 Do not be misled by recent events. U.S. Senator and possible immigration reform bill co-sponsor Lindsey Graham (R-SC) is no liberal. Lately, Sen. Graham has drawn the ire of county Republican parties in South Carolina by voting for the White House’s bank bailout plan as well as Democrat-sponsored climate change legislation. These votes resulted in his third censure by county Republican parties in the last two years. Local Republicans are furious despite Sen. Graham’s vehement opposition to healthcare reform and his goal of stopping an “out-of-control Obama agenda.”

Yet, despite the Senator’s obvious conservatism, he remains a supporter of comprehensive immigration reform. He is not the first Republican to do so. Recall that in 2006, the soon-to-be Republican presidential nominee Sen. John McCain (R-AZ) sponsored S. 2611 with the late Sen. Ted Kennedy (D-MA)—a bipartisan effort that garnered twenty-one Republican votes before eventually failing (Sen. Graham was a supporter of this effort as well, going so far as to call some of his angry detractors “bigots”). Before the McCain-Kennedy bill, Senators Chuck Hagel (R-NE) and Tom Daschle (D-SD) put forth a similar bipartisan effort.

Perhaps the best example of Republican support for immigration reform is that of the late President and oft–cited Republican icon Ronald Reagan. President Reagan, of course, signed the Immigration Reform and Control Act of 1986, which among other things, legalized 2.8 million undocumented workers.

The history of both successful and unsuccessful immigration reform bills is fraught with examples of bipartisan efforts such as the DREAM Act and AgJOBS. The bipartisanship that is evident in immigration reform stands in stark contrast to many of the current issues before Congress, including healthcare reform, which looks likely to pass the Senate without a single Republican vote. Comprehensive immigration reform, however, is a different issue—one that cannot be defined by party lines and one that will not be passed without votes from both Republicans and Democrats. Luckily, senators like Lindsey Graham realize that their states and their citizens receive many contributions from immigrants, and would be better served by passing comprehensive immigration reform.