Lost in Translation: What the President Really Said about Immigration Reform 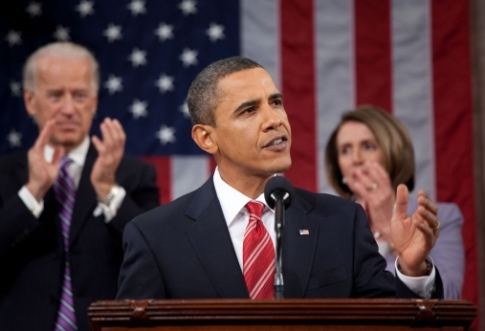 Unless you were hanging on every word in Wednesday night’s State of the Union Address, you might have missed that the President reaffirmed his commitment to fixing our broken immigration system. His commitment wasn’t as specific as many of the things he has said about immigration reform in the past. In fact, this glancing mention of immigration reform has already caused a backlash among activists—many of whom are disappointed that the message was too muted and without teeth. But upon closer inspection, you might find that President Obama’s message of bipartisanship, American values and the importance of diversity translates into moving forward on immigration reform.

Take a look at the framing of the immigration statement from a rhetorical perspective. It wasn’t in the “jobs” section of the bill (although it should have been), but was instead in a section about governing and getting bipartisan cooperation. The arc of President Obama’s address goes something like this: jobs, jobs, economy, jobs, health care, foreign wars and terrorism, good deeds abroad, and then the following:

We must continually renew this promise. My Administration has a Civil Rights Division that is once again prosecuting civil rights violations and employment discrimination. We finally strengthened our laws to protect against crimes driven by hate. This year, I will work with Congress and our military to finally repeal the law that denies gay Americans the right to serve the country they love because of who they are. We are going to crack down on violations of equal pay laws – so that women get equal pay for an equal day’s work. And we should continue the work of fixing our broken immigration system – to secure our borders, enforce our laws, and ensure that everyone who plays by the rules can contribute to our economy and enrich our nations.

In the end, it is our ideals, our values, that built America; values that allowed us to forge a nation made up of immigrants from every corner of the globe; values that drive our citizens still. Every day, Americans meet their responsibilities to their families and their employers. Time and again, they lend a hand to their neighbors and give back to their country. They take pride in their labor, and are generous in spirit. These aren’t Republican values or Democratic values they’re living by; business values or labor values. They are American values.

My agenda this year is going to keep moving forward. If Congress won’t cooperate in doing the right thing, I can do it administratively. I have revived the nearly dead civil rights division so it can prosecute cases again after 8 long years without a real commitment to civil rights. I am finally going to get rid of discriminatory policies preventing gays to serve openly in the military. While I could do this on my own, I want to work with Congress to make it happen. And I still support comprehensive immigration reform that mirrors what Janet Napolitano laid out recently—a three legged stool where “everyone who plays by the rules can contribute to our economy and enrich our nation”—which means a path to legalization for the 12 million undocumented immigrants who would help revive our economy and continue to provide the rich diversity that makes the country strong.

Remember, Congress, we are nation of immigrants and immigrants vote. The values of our immigrant nation are what still drives us (that is, we are all immigrants) and sooner or later we need to fix the immigration problem. This isn’t a Republican or Democratic problem (read bipartisan) and it isn’t a business or labor problem (read the coming together of these two groups to solve immigration issues is vitally important.) It’s an American problem.

Translation, of course, is an art not a science. Many people will, no doubt, not read all of these subtleties into the speech. But consider the wide range of issues the president could have mentioned. The fact that immigration reform, framed within the context of quintessential American values, made it into the speech at all is surely significant. Also of significance is the fact that for the first time, Spanish language network anchors—from CNN en Español, Univision, and Telemundo—were invited to the traditional pre-State of the Union lunch with President Obama.

For days to come, the State of the Union Address will be taken apart line by line until the next big Presidential event—the release of the budget. Hopefully the President will learn before then that he can’t solely speak in Congressional code and expect the public to be satisfied. In the meantime, congressional leaders on immigration, such as Sen. Schumer (D-NY), Sen. Reid (D-NV) and Rep. Luis Gutierrez, continue to beat the drum for immigration reform and deliver the President’s coded message—immigration reform is still a top priority for this Administration, but we need to work together in order to move forward.

Photo by the White House.