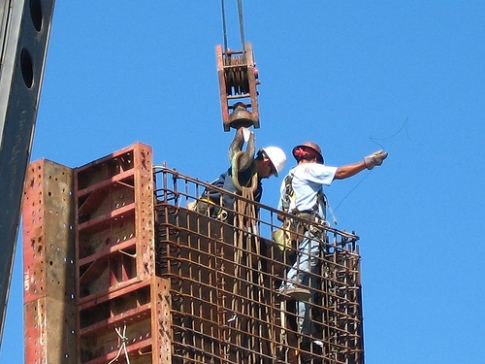 The Economic Policy Institute (EPI) yesterday released a new study, Immigration and Wages, which confirms what many other economists have found: “that immigration has a small but positive impact on the wages of native-born workers overall.” The report, by economist Heidi Shierholz, finds that the “effect of immigration from 1994 to 2007 was to raise the wages of U.S.-born workers, relative to foreign-born workers, by 0.4% (or $3.68 per week).” Even the small (and shrinking) number of “U.S.-born workers with less than a high school education saw a relative 0.3% increase in wages (or $1.58 per week)” as a result of immigration during this period.

Although these are relatively modest increases, they are a far cry from the dire claims of economists such as George Borjas that immigration significantly reduces wages for native-born workers. In fact, as the report explains, economists like Borjas base their analyses on faulty assumptions about how readily foreign-born and native-born workers can be “substituted” for one another in the labor market. Moreover, Borjas-style analyses are rooted in the incorrect assumption that because immigration increases the size of the U.S. labor force, and therefore increases the number of workers competing with each other for jobs, that it necessarily drives down wages. However, the EPI report clearly explains that this is not how the U.S. economy works in the real world:

An important thing to keep in mind is that the labor force is growing all the time. All else equal, more people, including more foreigners, do not mean lower wages or higher unemployment. If they did, every time a baby was born or a new graduate entered the labor force, they would hurt existing workers. But new workers do not just have supply-side impacts, they also affect demand. Those new graduates buy food and cars and pay rent. In other words, while new workers add to the supply of labor, they also consume goods and services, creating more jobs. An economy with more people does not mean lower wages and higher unemployment, it is simply a bigger economy. Just because New York is bigger than Los Angeles does not in and of itself mean workers in New York are worse off than workers in Los Angeles.

The EPI report builds on the work of economists such as Giovanni Peri who take a more nuanced, and realistic, view than Borjas does of how foreign-born and native-born workers “complement” each other in the labor market through the differing skills and abilities they bring with them to the workplace. When one fully accounts for the many differences between foreign-born and native-born workers in terms of education, occupational experience, and English-language ability, it becomes clear that they cannot simply be swapped for one another like batteries. In other words, immigrants tend to fill particular niches in the U.S. labor market and therefore are not competing with most natives for the same jobs. In fact, the presence of specialized immigrant workers in the labor force tends to increase the productivity, and therefore the wages, of their native-born counterparts.

As the EPI report makes clear, the plight of low-wage native-born workers can not be blamed on immigrants: “Declining job quality for the least-educated American workers is due to a host of factors aside from immigration, including declining unionization rates, the eroding real value of the minimum wage, and trade practices that expose U.S. workers with low levels of education to competition from much lower wage workers around the globe.” In short, scapegoating immigrants for the nation’s economic woes will do nothing to help American workers.