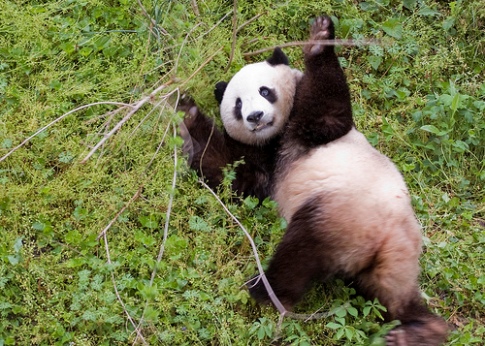 DC’s adorable panda Tai Shan returns to China today. Because of a current lack of native-born pandas, the U.S. turned to China for pandas to fill our zoos’ panda needs. Tai Shan’s parents, Mei Xiang and Tian Tian, have been in the U.S. on a cultural exchange of sorts, entertaining zoo patrons and attempting to procreate since 2000. Tai Shan was born to the couple at the National Zoo in 2005 and grew up before America’s eyes. However, the pandas are more than just a scientific exhibition; they embody the important values of cultural exchange which have always been an important means of deepening understanding and promoting international friendship and goodwill between nations. Tai Shan and his parents have been ambassadors for years. ChannelNewsAsia.com reports:

China owns all 14 giant pandas living in the United States. It loans the animals to zoos in the US and other countries to raise awareness of the endangered animals, and to help scientists study them. And as part of the agreement, any panda cub born in the US must one day be returned to China.

“I think pandas are an amazing, amazing ambassador for China – people love them, people come to see them. We have had fan clubs spring up around our pandas here because people are so fascinated with them, they want to learn about them, they want to save them.”

Furthermore, cultural exchange is a source of cooperation between countries that may have other certain political tensions. Says senior curator Brandie Smith:

In 1972, our first pandas arrived as a result of President Nixon and the relationship he built with China. Now our pandas here have been with us for ten years. A lot of people come to the National Zoo, and the first animal they want to see is the giant panda.

Mei Xiang and Tian Tian will remain at the National Zoo until at least next year. Zoo officials are hoping to be granted an extension, allowing the adorable bears to remain in Washington, DC for a few more years. There is a demonstrable need for Chinese pandas, and fortunately there is a mechanism for bringing pandas legally to the U.S. Tai Shan and his parents have been remarkable productive pandas, bringing joy to millions of zoo visitors. When the pandas go to China both of our countries will benefit from the relationships forged and knowledge obtained by these international visitors. Putting knowledge aside though, American panda lovers are heartbroken. “We were all in denial,” said Elise Ney, 49, of Bethesda. “We just didn’t believe it would ever happen. . . . All of us have followed him since birth.”