Supporting Immigration Reform in Nevada is More Pragmatic than Political 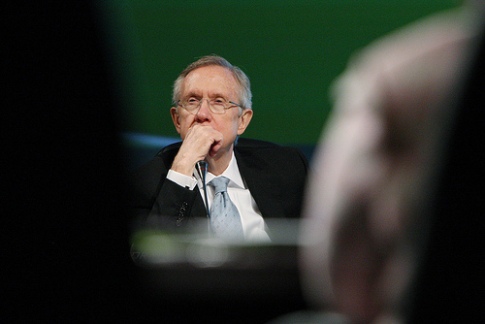 If we truly want to fix our broken immigration system, and not just score political points, we need comprehensive immigration reform that is tough on lawbreakers, fair to taxpayers and practical to implement … Immigration reform will help us safeguard the rights and wages of American workers and force unscrupulous employers to get on the right side of the law. So long as immigrants working illegally are afraid to report being underpaid, exploited and abused for fear of deportation, American workers will be undercut. We need to require these workers to apply for legal status and become hard-working taxpayers.

Also on Sunday, a poll conducted by the same newspaper cited a statistical split on the issue of whether or not likely Nevada voters supported a path towards citizenship—a split which flies in the face of said editorial staff’s characterization of immigration reform as an “unwanted reform.” Harry Reid didn’t accept the 50-50 split, noting that had the pollsters posed the question in a way that truly characterized his proposal, support would have been higher.

Semantics aside, however, why is Harry Reid rallying for immigration reform now? Is this just a ploy to excite the Democratic base in Nevada—a group he needs to turn out for him in November? Aside from the fact that Reid has always been a strong supporter of immigration reform, he is a pragmatist. He has an understanding of who his constituents are and how they can move the political dial in his state. One might even say he has a better memory than the Democratic administration who was helped over the finish line by the Latino vote last November—particularly Nevada’s Latino vote. Obama defeated McCain among Latino voters by 76% to 22% in Nevada, where 11.6% of the state’s electorate is Latino. Nevada also had one of the greatest increases in the Latino vote in 2008 growing by over 65% (or 47,000 additional voters).

Nevada is a states where the growing political and economic clout of immigrants, Latinos, and Asians is also clear as the desert sky. Immigrants now make up nearly 20% (497,821 people) of Nevada’s population, and 38% of them are naturalized U.S. citizens who are eligible to vote. Immigrants and the children of immigrants now account for nearly 15% of all registered voters in the state.

From an economic standpoint, Latinos account for one-quarter of all Nevadans and wield over $14 billion in consumer purchasing power. At last count, the sales and receipts of businesses owned by Latinos and Asians totaled $3.6 billion and employed more than 25,000 people.

Harry Reid may hope that these communities turn out for him at the polls but he also knows immigrant, Latino, and Asian workers, consumers, and entrepreneurs are integral to Nevada’s economy and tax base. His position on immigration reform, however, is less political than pragmatic. He knows immigrants support job creation and are a strong part of his state’s labor force. While Reid’s supportive stance on the issues they care about is smart politics, it is also good for the long term economic recovery of his home state.

Photo by the Center for American Progress Action Fund.