The Nativist Resurgence of the Radical Right 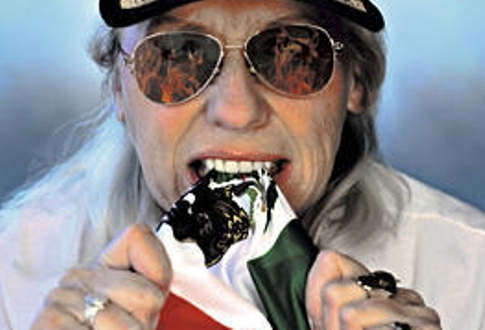 The April 19th anniversary of the 1995 Oklahoma City bombing is a grim reminder that the United States is far from immune to the dangers posed by home-grown extremists on the radical right. In fact, as the Southern Poverty Law Center (SPLC) notes, the radical right is experiencing a resurgence at the moment that is “driven largely by an angry backlash against non-white immigration… the economic meltdown and the climb to power of an African American president.” SPLC has found that the number of “nativist extremist” groups in particular, “organizations that go beyond mere advocacy of restrictive immigration policy to actually confront or harass suspected immigrants—jumped from 173 groups in 2008 to 309 last year.” Hate crimes against Latinos are up as well. The recent guilty verdict in the killing of Ecuadorian immigrant Marcelo Lucero serves as an example of how deadly these hate crimes can be.

Moreover, the diverse collection of nativist Minutemen, anti-government militias, and self-described “Patriots” who populate the radical right are sharing elements of their ideologies. As SPLC notes, “increasingly, Minutemen are giving credence to the sort of fringe conspiracy theories that have long typified militia and other so-called Patriot groups… They include the belief that a massive cover-up has been conducted regarding Barack Obama’s birth certificate, which supposedly shows that he was born in Africa and is therefore ineligible to serve as president of the United States.” And, as Andrea Nill points out in the The Wonk Room, the head of the anti-immigrant Americans for Legal Immigration Reform PAC recently “spoke at a Houston Tea Party event on what he views as a ‘conspiracy’ or ‘globalist’ plan to ‘transfigure this country’ through illegal immigration.”

Nativists and other elements of the radical right in this country are tapping into a deep and dangerous reservoir of political discontent. A new survey by the Pew Research Center finds that “Americans’ trust in government and its institutions has plummeted to a near-historic low.” The survey found that “an increasing number—almost 1 of every 3 people—say they believe government is a major threat to their personal freedoms and want federal power reined in.” Among self-identified members of the Tea Party movement, 57 percent “say the government is a major threat to them, and 43 percent say they are angry with the federal government.”

One manifestation of this sort of populist anger and frustration is apparent in Arizona, where the state legislature recently passed the “Support Our Law Enforcement and Safe Neighborhoods Act,” which would require police to check a person’s immigration status if they suspect that person is in the United States illegally. Senator John McCain, a one-time supporter of comprehensive immigration reform, not only is expressing support for the Arizona law, but has partnered with Senator Jon Kyl to introduce his own enforcement-only border-security bill. But passage of the Arizona law will not only encourage the racial profiling and official harassment of Latinos in general, but will embolden the small minority of armed extremists who are inclined to take matters into their own hands.

As an April 2009 report from the Department of Homeland Security (DHS) concluded, “over the past five years, various rightwing extremists, including militias and white supremacists, have adopted the immigration issue as a call to action, rallying point, and recruiting tool.” The report warns that “rightwing extremist groups’ frustration over a perceived lack of government action on illegal immigration has the potential to incite individuals or small groups toward violence.” The rantings and ravings of “birthers” and other conspiracy theorists on the radical right may seem farcical at times, but the violence they sometimes commit is deadly serious.