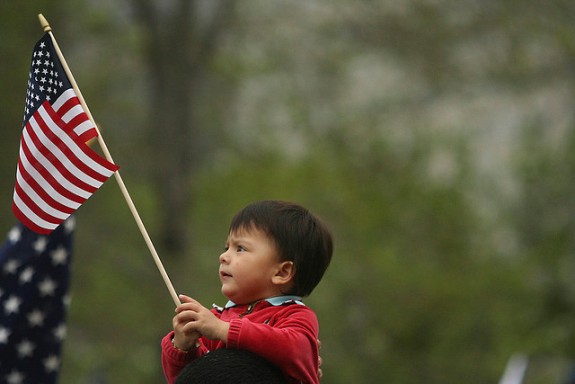 The Center for Immigration Studies (CIS) released another report today attempting to blame our economic woes and budget shortfalls on immigrants—this time using the children of immigrants, most of whom are U.S. citizens, as scapegoats for benefits usage (here Medicaid, food assistance, cash assistance, and housing programs). As are most restrictionists’ attempts to blame immigrants for all of America’s problems, the report is rife with methodological problems. Despite the headline that 57 percent of households headed by an immigrant with children used at least one benefits program, compared to 39 percent for native households, the results actually show that when controlled for income, immigrant households use benefits at the same rate as native born households.

In the same breath, however, CIS’s report finds that immigrants come to the U.S. to work—a fact that challenges the idea that they come here solely to receive benefits. In fact, immigrant households are more likely to have a worker than native-born homes.

But that’s just one of CIS’s many contradictions. CIS enjoys pointing out the cost of undocumented immigrants to the U.S., yet has no problem supporting more and more costly enforcement programs, both on the border and on the interior. The President’s 2012 budget asks for $2 billion for detention beds, $527.6 million for border fencing, infrastructure, and technology, and $184 million for Secure Communities. Overall, the Customs and Border Protection (CBP) budget would sit at $11.8 billion and the Immigration and Customs Enforcement (ICE) Budget at $5.8 billion.

CIS’s report is another sad attempt to put the blame of our economic woes on the doorsteps of immigrant households. Even more deplorable is that they’re blaming the children of immigrants, with the implication that they should not be receiving benefits such as free and reduced lunches. Immigrant households often get benefits through USC children for things like school lunches and medical care.

Instead of fighting a costly war of attrition against immigrants in order to save a nominal amount of money, the U.S. would do better to integrate, educate, and welcome immigrants. Money spent in these areas would cost much less than the police state that CIS advocates for, and its own report suggests that this policy would work. The U.S. Refugee Resettlement Program (which would receive $824 million under Obama’s 2012 budget) helps them start a new life and integrate into this country, and the result is that they tend to use benefits programs at a lesser rate than other immigrants. The 2012 budget request for immigrant integration programs is only $19.7 million, a far cry from the billions spent on CBP and ICE.