Two Years Under the Obama Administration, How Does DHS Measure Up? 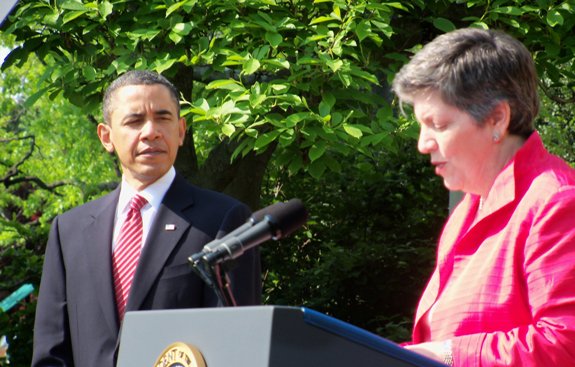 Nearly two years ago, expectations ran high as President Obama took office and Secretary Napolitano took the reins of the Department of Homeland Security (DHS). In review of DHS’s first year under the Obama Administration, the Immigration Policy Center (IPC) found that while many promising changes were initiated, few were successful due to limiting political constraints. Today, two years out, we find a department still struggling to balance priorities, entrenched in an enforcement-heavy debate, claiming that without Congressional action, its hands are tied on administrative reforms. That claim, however, is inconsistent with the wide range of executive branch authority available to DHS and the President.

This week, the Immigration Policy Center released its second DHS review, Second Annual DHS Progress Report: An Analysis of Immigration Policy in the Second Year of the Obama Administration, which looks at DHS’s actions in 2010 through three critical lenses—prioritization, transparency and coordination—to assess whether DHS has made progress since last year. The report also looks at whether DHS has the capacity to follow through on the vision of reform outlined by the Obama Administration.

As is so often the case, there are no black and white answers. Findings on DHS’s record were mixed, with progress in some areas and setbacks in others. DHS’s treatment of Haitians over the last year represents some of the best of the Department and its people, yet it also evidences the lack of coordination and vision endemic to the institution. For example, at virtually the same time that USCIS was poised to implement the Help Haiti Act of 2010 (which grants permanent residence to orphans paroled into the U.S. after the earthquake), ICE announced that it would resume deportations to Haiti, despite the abysmal conditions that continue to exist one year after the earthquake. This lack of a disciplined and coordinated approach to issues seems to routinely undermine the good work that does happen within the agencies.

When it comes to prioritization, ICE  failed to live up to its stated focus on criminal aliens. Instead, ICE touted the large numbers of noncriminal aliens rounded up and deported through programs like Secure Communities, which continued to operate behind a veil of secrecy.

Among other things, DHS also gets low marks on the coordination front as it consistently fails to provide the critical leadership and reporting structure needed to bridge the gaps and move forward with a coherent and unified agenda. The lack of coordination between CBP, ICE, and USCIS has led to uneven and inconsistent application of information-sharing practices, defying many of the Obama Administration’s directives to cut red tape and provide the public easy access to information.

So what can DHS do in the absence of Congressional action? Plenty. As an executive branch agency, DHS has wide discretion to enforce, implement, and interpret existing laws. Some of the report’s recommendations include the following:

While DHS can and should implement these changes, the report also acknowledges that the Obama Administration and the front offices of DHS need to be more engaged on the day-to-day implementation of immigration policy and exhibit real leadership if any of these reforms are to become a reality.